I've been reading with interest the news that Games Workshop are working on a new version of the old classic, Space Hulk. The new edition is slated for release on 5th September 09 and from the details released so far it looks mighty fine. 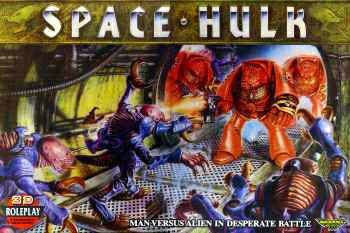 This got me to thinking about all the great games that I played in my younger days that were released (or co released) by Games Workshop.

One of my favorites was Curse of the Mummy's Tomb. This was a multilevel board game which came with a set of nicely sculpted metal miniatures of Adventurers, Archaeologists and of course a Mummy. In fact I think I still have some of these models. As I recall putting the board together was a skill unto itself.
Another game I played was Blood Royale. This was a complex multi player, battle and resource game based in medieval Europe. I found the game a bit heavy (lots of marrying off of daughters to make political alliances) myself but with the right group of players it could be great fun.

Perhaps at the opposite end of the scale of strategy was Chainsaw Warrior. This was a solo play game that did the rounds amongst my friends for a while. It was good fun but as a solo game it lacked the 'social' element that made other games more enjoyable. Another game with a simple concept was Dungeonquest. This game still has a strong following online and I have my original copy lurking in a cupboard somewhere.
Probably one of the best games I played however was Fury of Dracula. I recall games being fast paced and frantic. Like Dungeonquest it was designed for 2 to 4 players and it proved so popular that it was re released in 2006 by Fantasy Flight Games.

There were also a whole raft of other GW games that my friends and I played at one time or another. Oi! Dat's My Leg! was a 'fun' game aimed at younger players. Rogue Trooper was a cool game based on the Blue skinned genetically enhanced warrior from the pages of the Comic 2000AD. Super Power was a complex resource attainment and strategy game with impossibly tiny game pieces. 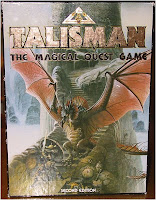 Talisman is probably the most successful board game to come from the GW stable. Still going strong, many of my friends still have copies of this game. It spawned a whole series of supplement boxes and was re released last year by Fantasy Flight Games.

I've whetted my appetite for a few of these old games and I think I'll have o find my copies and introduce my kids to them. It certainly beats watching TV.
Posted by BigLee at 08:01

Email ThisBlogThis!Share to TwitterShare to FacebookShare to Pinterest
Labels: Boardgames