I recently read a spoof article about a pickled Dragon foetus found in a 30inch jar in a Garage in Oxfordshire. I think the original article on this was featured in the Daily Telegraph - that bastion of truth and hard nosed reporting - and dates from 2004. 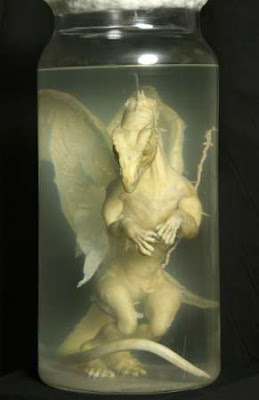 "A metal tin found with the dragon contained paperwork in old-fashioned German of the 1890s. Mr Mitchell speculates that German scientists may have attempted to use the dragon to hoax their English counterparts in the 1890s, when rivalry between the countries was intense. At the time, scientists were the equivalent of today's pop stars. It would have been a great propaganda coup for the Germans if it had come off. The documents suggest that the Natural History Museum turned the dragon away, possibly because they suspected it was a trick, and sent it to be destroyed. But it appears a porter intercepted the jar and took it home."

The author of the article suggested that the failure of the Natural History Museum to carry out an X-Ray of the 'Dragon' was a clear sign of a 'cover up'. Personally I think the NHM has better things to spend its limited budget on. Obviously this is a Hoax or scam but you've got to admire the craftsmanship that has gone into it.

And how cool would it look sitting on your desk next to your gaming books and models!!