I like Darkmantles. As monsters go these are quintessentially D&D as far as I'm concerned. Utterly random and emotionless they lurk in the Underdark just waiting for an unsuspecting adventurer to pass below them. 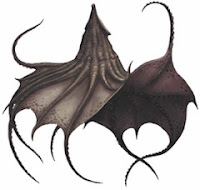 These dark fleshed, octapoid looking creatures hide on the ceilings of caves and look for all the world like a Stalactite. Using echolocation just like a bat they find their prey and when it passes below them they drop down wrapping their tentacles around the head. The article Weird & Wonderful Darkmantles on the Wizards website provides variations on the Darkmantle (for 3.5e) that make this creature much more deadly and difficult to deal with.

I used Darkmantles against my players during the last campaign I ran. The PC’s were exploring a dank and fungus filled cave of stalagmites and stalactites. The group were attacked by group of four Darkmantles which cause chaos and much muffled screaming for the duration of the battle.

Here's an extract from our campaign journal describing the climax of the battle.

"Runc leaped forward, and began to tug wildly at the creature covering Karisima but as they fought that one the other three Darkmantles launched themselves up from the floor.... As the party fought them and cut into their flesh so the blood splashed about – burning acidic, it did as much damage as the beasts themselves.... Eventually three of the creatures were killed, leaving the last once covering Asgar.

Already the former farmhand tuned ranger had dropped to his knees, his air having been cut off by the constricting creature about his head. It was causing him to blackout. In a concerted effort the group directed their attack, and finally cut the creature from Asgar’s head. But the blood from the creature covered the already unconscious man." 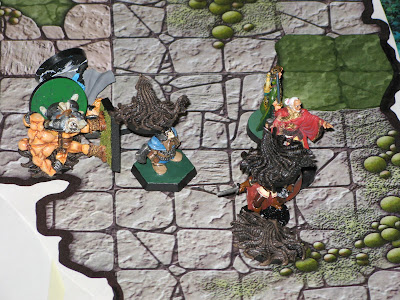 This battle was only meant to be a small distraction in the larger exploration of the caves but it proved to be one of the more memorable moments in the game. And the moral of the story for all GM's? Never underestimate the entertainment value of turning one of your players characters blue from asphyxiation.
Posted by BigLee at 08:01