I bought several books from the bring & buy stand at the To the Redoubt show in Eastborne last month. One of these was Panzer: The Armoured Force of the Third Reich by Matthew Cooper and James Lucas. 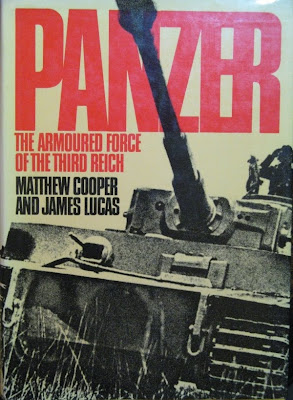 The book discusses the grand tactical ideal or Armoured Idea as devised by Guderian and others in the pre-war years. The main conclusion of the book is that the German High Commands failure to grasp or fully support the Armoured Idea crippled the Panzer divisions from the outset and ultimately ensured Germany's defeat in the war as a whole.

Starting from the pre war years the book looks at the development and use of the Panzer divisions throughout the war, through the rise (Poland, Flanders, France & the opening of Barbarossa) and eventual fall (North Africa, Russia & Western Europe) of the Third Reich.This chronological discussion of historical events was in and of itself quite interesting but it was the interpretation of command decisions and their effects on operational success that proved most interesting.

During the Russian Campaign for instance it is argued that the faults in structure, equipment and leadership were of little consequence so long as the initiative lay with the Wehrmacht. But when the invasion went on the defensive all these faults combined to make defeat almost inevitable. In short so long as the war was a war of maneuver Germany had the upper hand but when it because a war of defence the Soviet unions massive advantage in terms of manpower and equipment ground the invaders down. 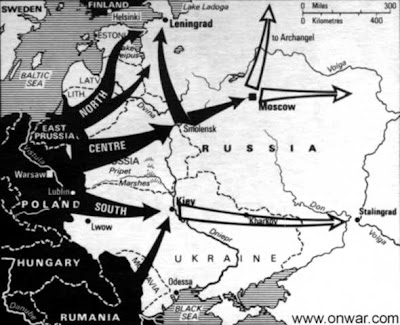 (Source: http://www.onwar.com/ )
This first half of the book is followed by a chapter on the Organisation of the divisions and another detailing the equipment used. The book then concludes with a series of chapters that look at the Panzer group (Kiev Encirclement) the Panzer Corp (The Gazala Battle), the Panzer Division (The Thrust to the Channel) and the Single tank (Wittmann at Villers Bocage).

I found this book very readable and although it contained lots of statistics and troop numbers etc it was never overwhelming (this isn't a technical manual). Indeed the use of information such as production levels and divisional numbers are only used to illustrate the conclusions of the given section or chapter they appear in. Overall I found this a very good starting point for my understanding of the Panzer Divisions of WWII. My only gripe with the book was the lack of an Index which makes this hard to use as a reference source. However the Bibliography is very good and would make an excellent place to start when considering further reading in this fascinating subject.
Posted by BigLee at 08:01