I shot this bit of video of the replica V1 at the Muckleburgh Collection while away on holiday and was trying to remember where I'd seen another on display.
There's an original V1 in the Imperial War Museum in London and another at Duxford. Both are originals rather than reproductions. 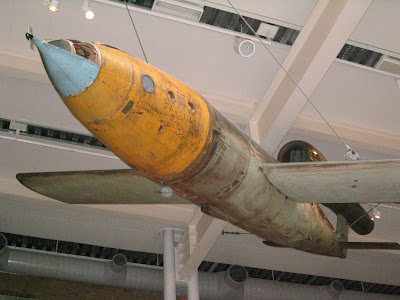 I'm not sure if this V1 is a replica or not but it is displayed very effectively at Eden Camp in Yorkshire. I took this picture in 1995 (long before the advent of the Blog). 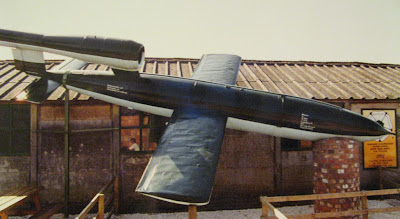 The thing I find fascinating about these machines is that while they represented the cutting edge in rocketry in the early 1940's, up close they just look so primitive. Not only that the explosive yield of the V1 seems ridiculously small for the expenditure of resources and manpower.

I'm currently reading about the creation of the Panzer regiments and the authors (Matthew Cooper & James Lucas) argue that the early Panzer regiments were under resourced, poorly developed and that the vehicles themselves were not all that superior to the British & French tanks. This didn't matter at the beginning of the war when the Germans caught pretty much everyone with their pants down, but later in the war this proved a crippling deficit. The new generation of heavy tanks (the Panthers and the Tigers) came along too late and in too limited quantities to turn the tide against the allies. Meanwhile money and effort was being squandered on projects like the V1 & V2.

I recently listened to a radio article (on Radio 4) about a new 'history' of WW2 in which the author insisted that the war was winnable for the Germans but for one essential factor: Hitler. The ultimate weakness of the National Socialist state of the 30's & 40's was its despotic leader who regularly ignored the advice of experts and for whom political fanaticism had replaced pragmatism. This was what ultimately proved the undoing of the Third Reich.

For me the V1 and of course the V2 illustrate this perfectly. While I can marvel at the technological achievement one cannot help but think what would have been the consequence of redirecting all that effort and science into developing existing weapons. Had such material effort not been wasted on these and countless other projects - pursuing some deluded vision of Aryan superiority - what would have been the consequences for history?