I’ve played D&D for a long time and I’ve played a lot of different campaign settings. A good few of them were ‘home grown’ settings invented by the GM and every one has been memorable and enjoyable to play. I was trying to put my finger on the reason for this the other day. Why was it that these so called ‘amateur’ settings were as engaging as their bigger budget cousins the ‘official’ settings like the Forgotten Realms, Dragonlance, Ravenloft and the granddaddy of them all Greyhawk?

I think any setting built with a solid myth/back-story can be enjoyable because the world has a dimension beyond the narrow viewpoint of the PC’s. A setting with a history, a creation myth and distant lands is by definition ‘larger’ than the view of the characters, and therefore feels more real. I decided to canvas the opinion of my gaming group and here are there views on this matter.

Derek – “Creating a world with history, mythology and timelines is very time consuming and not something that can be achieved for a quick get together and play. However, if you have the time and imagination to work on this then it can deliver a full and rich gaming experience for both the GM and the players. It allows you to live in worldscape not restricted by other writer's view of right and wrong, or in the case of predefined game settings what can or can not happen to certain lands or characters. I suppose it depends on how seriously you take your escapism.

A character that has been fleshed out with a decent back story, a bit of history and mystery gives a much better gaming experience and you tend to feel more affinity towards the character whether they be lawful good or chaotically evil. Creating such a character is even more fulfilling when they appear to have a place in the world in which they live. The world exists, their ancestors exist and this breeds legends that can filter forward into the campaigns giving both the characters and the campaign much more depth.” 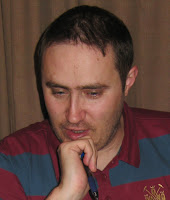 Peter - “If the world is constantly being created five feet in front of the PC's and ripped up again as soon as they have passed you're really playing a version of hero quest. While the PC's actions should be the main focus of the story, it's good to know things are going on elsewhere, [it] gives the impression there is more to the world than the bubble of space the PC's currently occupy.

Having a less detailed world gives the DM far more flexibility - you generally only detail the bits around the PC's and if they do head into a new area of the map you create terrain and cities etc that are tailored to your current needs. Also results in a far easier set up and the GM doesn't have to do anything like as much work, and also means less waste

I do think home-grown worlds, however sketchy, do need both a strong background, and also a lot of background activity. The background ties everything together, gives shape to the campaign and gives the players a sense of their PC's place in the world”

Both make good point's but I have to say I tend towards the more detailed end of the spectrum. I wrote a campaign guide for my Isles of Ethos Setting that went into lots of detail, but I definitely see the benefit of the more flexible approach of Peter. I drew heavily on the resources and ideas from the Mythopoets website, and I heartily recommend it to any GM considering writing a world setting.
Posted by BigLee at 08:01