At last I have finished painting my first 15mm Flames of War miniatures. Its been a slow process but a worthwhile one as I have learned a lot of valuable lessons for the future. I've mentioned several times that this is my first attempt at 15mm and my first Historical subject outside the occasional 28mm figure. So its been a steep learning curve in many respects and I feel as if I have had to re-learn how to paint to get a good result in this scale. Here are a few of the lessons I have learned. 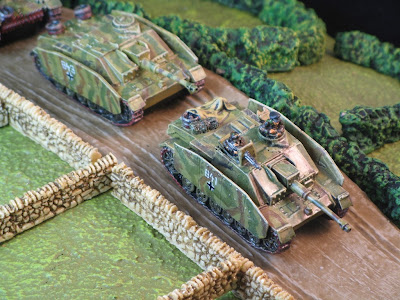 Resin Miniatures - The Schürzen plates (The additional side armour, hung from rails to protect against anti tank rockets and artillery fire) on the resin models are very fragile. I learned this the hard way... after painting, applying decals and varnishing I cracked the top half off and had to use superglue to repair. It looks terrible and I've got the right hump about it! I'm buying metal next time!! 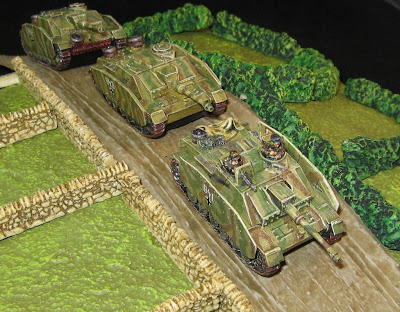 Holding the miniatures - Blue tack doesn't adhere to the resin models and the metal mini was too heavy to hold in this way. Next time I'll superglue a holding stick to the base and cut off when the model is finished. 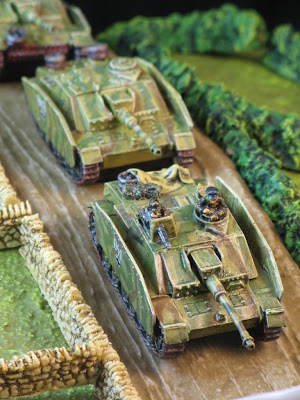 Order of painting. I tried block painting & dry brushing to apply the base Middlestone (Vallejo 882)colour. I preferred the look of the dry brush method but it takes at least two coats to get solid enough colour to look right. I then washed with dilute black but in future I'll try a wash of dark tan (Vallejo Flesh Wash). I then did a highlight dry brush with Ivory (Vallejo 918)to define the edges. I need to be bolder at this stage in future. Applying the Camo tones down the whole mini and it was necessary to reapply the highlights towards the end of the painting process. 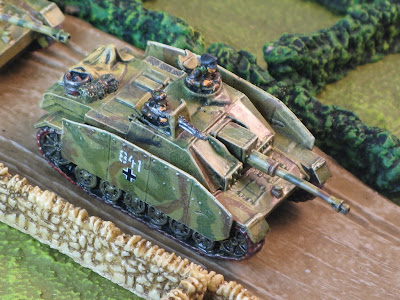 Camouflage - I spent a whole afternoon experimenting with paint and flow improver to achieve a result that would simulate paint applied with an airbrush. I tried several mixes of watered down flow improver with paint but could never seem to achieve the same opacity and smoothness as airbrush applied paint. However my last experiment used pure flow improver with the paint (5:1 ratio) and produced far better results. This is the recipe I used when painting the camo on my Stugs although I should note the paint & Flow Improver separate and needed to be re mixed with each dip of the brush. Next time I'll try and apply the paint in smaller ribbons and give each line a second coat once dry. 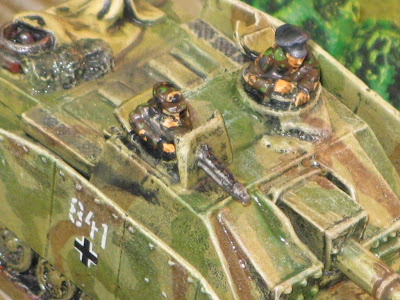 SS Pea Dot Camo - I enjoyed painting this impossibly detailed camo pattern but felt the overall effect was too dark. I've since seen some alternative instructions for painting this camo starting with a lighter base colour and I felt the finished effect looked much better. I'll have to decide which method to use before I paint a whole platoon of Panzergrenediers.
Overall a good experience and a lot learned. I'm pretty happy with they way these turned out but I'm determined the next lot will be better!
Posted by BigLee at 08:01