The 1st Imperial Mounted Infantry (IMI) were an ad-hoc unit made up from troops of four different infantry regiments (the 3rd, 13th, 24th, and 80th). This proved valuable as all the men had experience as a regular foot soldier which made them a more versatile as a scouting and skirmishing force. There were two IMI squadrons, each consisting of 150 men, NCO's and other ranks. 2nd Squadron was attached to 1 Column under Wood with 1st Squadron commanded by Lt Col Russell was part of 3 Column under Glyn. 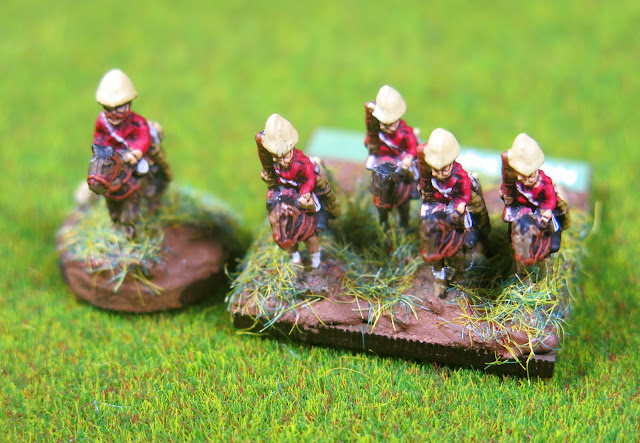 On 22nd January all the 1st Squadrons officers and 80 Other ranks were attached to Lord Chelmsford's force, leaving just 31 men (1 troop) at the Isandlwana camp. Its unclear from what I have read if these 31 men were a single troop or men from each of the four troops that were excused duty for various reasons. If they were left as Isandlwana for medical reasons then they were extremely unlucky. Whatever the reason for them being left at the camp the IMI acquitted themselves well during the battle and were able to give covering fire to the retreating British troops. Only 11 of the 31 survived the massacre and probably only because they were able to reach their horses and effect an escape. 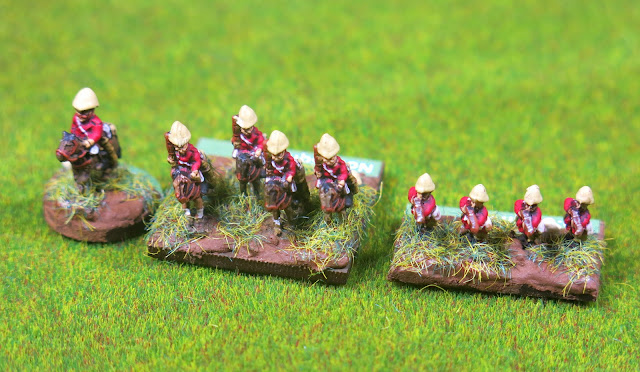 Typically the IMI were armed with Henry-Martini rifles like the majority of British forces in the war however I have read that in January 1879 they were armed with Carbines.  The retained their foreign-service helmets and red regimental tunics, but were issued with brown Bedford cord breeches, riding boots and a brown leather ammunition bandoleer. They retained their white haversacks and water-bottles but discarded the rest of their valise equipment while on mounted service. As the name suggests, the mounted infantry invariably dismounted to fight, with one man in four was designated as a horse-holder. 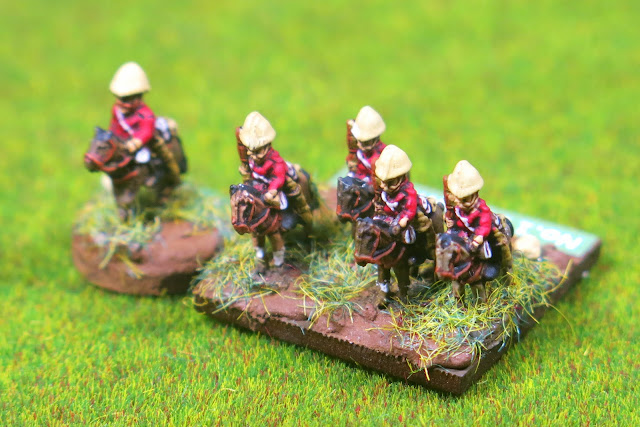 I have painted just the unfortunate Troop of 1st Squadron left behind at the camp. I have also made up an NCO command stand (all the senior officers were with the rest of the squadron). I have also used some spare infantry figures to make up the same unit as a dismounted skirmish unit. Five mounted figures and 4 foot will earn me a whopping 7 points!
Posted by BigLee at 17:20