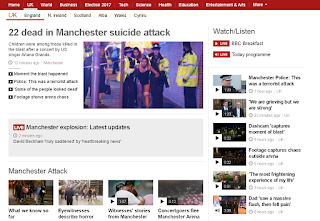 I don't normally do this - I try to keep my blog a politics free zone - but today I can't. This morning I woke to hear the terrible news that some scumbag had blown himself up at an Ariana Grande concert in Manchester Arena. I won't be wasting a millisecond grieving for that bastard but my heart is breaking for the 21 others confirmed dead so far, including children. With 59 injured I think we can sadly expect that number to rise. The fact that that creature decided to target a concert filled with children and families make this all the more despicable.

No political objective, no religion or belief can justify this act. It is simple barbarism, nothing more. The desperate act of animals, without an ounce of humanity in them.

My reaction this morning is born partly from the fact that I am the father of two girls, who have tickets to a concert at the O2 Arena later in the year. When I heard the news I was immediately in the place of the parents of lost, injured or frightened children and all I wanted to do was gather my girls in my arms and protect them. There will be many parents this morning hugging their children close.

Our initial reaction is of course anger, frustration, incredulity and inevitably, fear. We have to deny the terrorists that victory. They want us to react to extremism with extreme measures. They want us to shift further and further away from our open and tolerant way of life because they are frightened by it. And there is the great irony, the people most scared by terrorism are actually the terrorists, because they know in some deep part of their psyche that they won't win. We are stronger than our base instincts, we are braver than our primal fears, because we are human, because we care about other people and because to do otherwise would be to give the terrorists exactly what they want.
Posted by BigLee at 08:54