Frostgrave - A new (and old) adventure 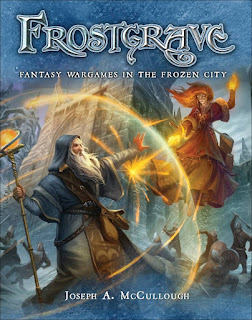 When I was at Salute I bought several sets of rules including the popular Frostgrave by Joseph A. McCullough (published by Osprey). I bought it because I'm trying to settle the young Padawan down on a set of rules that are easy to play but will also afford her the opportunity to paint miniatures that interest her. Lets face it, starting her painting off on 6mm figures just isn't going to work! We will continue to play other games such as To The Strongest and FOW but I wanted a new game that would give her a 'way in' to the hobby both as a gamer and a painter. She'd already expressed an interest in something with a Fantasy element and Frostgrave fits the bill completely.

I bought the rules to read with no guarantee that we would use them but I'm quickly coming round to the idea that this will be a good choice for skirmish wargaming with the Padawan. Now that I have had a chance to read the rules thoroughly (and for a change I did, end enjoyed reading it as well) I'm even more convinced this is the right set of rules. They are elegantly simple and don't come with some of the complicated 'baggage' that some systems carry with them.

For a start I have a large collection of suitable fantasy miniatures already. Although I haven't played D&D for years I still have most of my figure collection boxed up, including a lot of terrain, dungeon debris and miscellaneous items such as treasure boxes, tables, carts etc. It won't take much effort to convert my models to fit the Frostgrave setting with a little 'snow and ice' added to bases etc. I also have a wide range of 28mm scale terrain that can be dusted off and put back into service after years in storage.

Another reason these rules work for me (and hopefully also for the Padawan) is that they are suitable for two players on a small table as small as 2'x2'. Our issues with lack of space are well documented and are the main reason I moved into 6mm several years ago. This rule system means I can largely use existing figures on my small pop-up table. The only thing I need to buy is a suitable game mat.

Another good thing about these rules is that they are designed to be 'up scaled' to include more participants on a larger table. I may even be able to convince my old D&D Group to get together again for multi player session of Frostgrave... hell the last time we played D&D we were using 4th edition and the game felt more like a skirmish wargame than a role-play game so these rules should feel pretty familiar to us.