A couple of weeks ago a handful of the Rejects got together for an American War of Independence game in Posties shed-o-war. I've not written my battle report until now partly because I've had a very busy couple of weeks and didn't have the time... but if I'm honest its mostly because I was on the loosing side and I was sulking!

The Setup
As usual Postie chose a historical scenario to re-fight but decided not to tell us which engagement it was. His assumption was that if we knew our history well we would know what was about to happen. As it was this didn't make any difference at all to the outcome.

I was on the American side with Surjit as CO and Ray as 2iC. We were told from the outset that our objective was to break the British Brigade directly to our front. Our plan was to do just that, crossing the open ground as quickly as possible to engage with the British. I was commanding three light infantry units on the left flank and my job was simply to slow down any attempt to outflank our main line of attack. A simple plan that went completely to hell in under two turns!

Once again I forgot to get a copy of the Order of Battle! 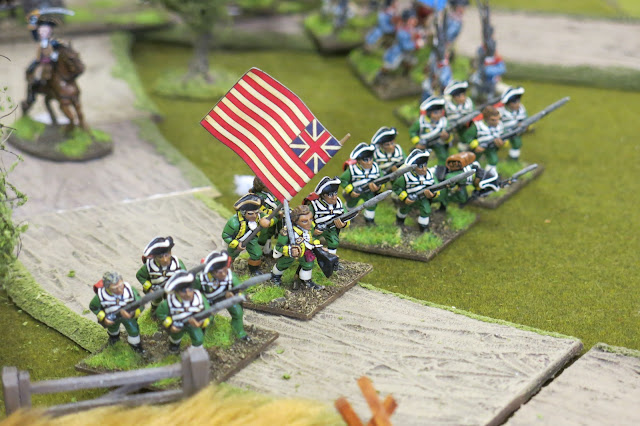 Analysis
This was probably one of the best looking layouts we have had in the Shed-o-War for some time. The table and the troops looked spectacular and hats off to Postie for setting it all up and organising the game. Unfortunately that is about the only good thing I can say about this battle...

OK, the American plan was laid out for us from the start. We were told we had to destroy the British Brigade to our front so we planned to do just that. Our troops had to get clear of woods and cross some open country as quickly as possible in order to close with the British. Our initial plan was to do just that. Surjit and Ray would focus on heading straight forward and closing with the enemy while my light infantry would harass and slow down any attempt by  the British to outflank us. I was a little sceptical I could achieve this as my three light infantry units faced four British units including an elite Grenadier unit. However I had a range advantage (one of my units was armed with rifles) and mine was just a delaying action to buy time for the real attack in the centre.

This plan lasted approximately one turn! The British to their credit did something completely unexpected, they fell back. This seemed to completely confound our commander and in no time at all our plan disintegrated. Surjit turned his attention to the flank where I was based and that was about that as far as my command of my troops was concerned. I'd move them and he'd order me back. I wanted to fall back and fire and he had me push forwards to be used as cannon fodder for his line units behind me. My Light infantry started getting whittled away and I couldn't see any clear objective. Meanwhile the centre attack stalled and our last chance of victory evaporated. That's the point when Ray threw in the towel and went to make Tea and Coffee!

We played on one more turn but the game was lost to the Americans, even when reinforcements arrived on the flank. By this point our central thrust had stopped and Surj had reinforced the flank and there was barely any room to swing a cat, let alone deploy reserves.
Posted by BigLee at 06:57