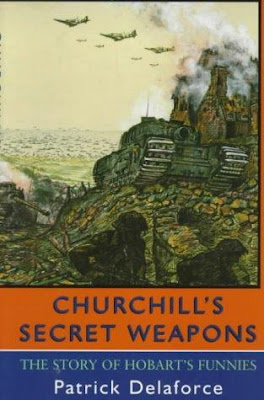 Churchill's Secret Weapons by Patrick Delaforce is the story of Hobart's Funnies, the specialised tanks designed to support the allies in their attempt to break into Fortress Europe. Major General Percy Hobart was irascible and eccentric and had been retired from the military and serving in the Home Guard when his Brother-in-Law - prime Minister Winston Churchill - resurrected his career and put him in charge of the 79th Armoured Division.

I bought this book second hand a few months ago for the paltry sum of 50 pence. It was in good condition and featured a painting of a Churchill Tank on its cover which was what initially caught my eye.

The 'Funnies' were vital to the success of the D-Day landings and were largely born out of the lessons learned by the disaster at Dieppe. This 'raid' by was an unmitigated disaster because the port was so heavily defended that many troops couldn't get off the beaches. The failure of the raid was a shock to the British Political and Military establishment and soon enquiring minds like Churchill's were trying to draw some value from the lessons to be learned. Prime amongst these was the clear need for specialist weapons to clear obstacles, breach defences, bridge trenches and clear mines while under heavy fire.

Although Hobart didn't invent the 'funnines' himself his background as a military engineer ensure their development and application into effective weapons of war. In other more traditional hands the benefits of such radical and innovative weapons might have been overlooked or misapplied in the coming maelstrom of Normandy and beyond. Under his stewardship a whole stable of weird and wonderful vehicles were developed and brought to battle effectiveness in time for Operation Overlord.


Among the many specialist vehicles and their attachments were:

There were many more and each had a very specialised role that was vital to keeping the rest of the army moving regardless of the obstacles before them.


The book is incredibly informative but does suffer from a lack of narrative flow in my opinion. Descriptions of engagements read like regimental histories and are very hard to follow. That's not to say that the engagements described are not interesting but I felt it would have been easier to read had there been more first hand accounts included in the text. Another flaw in the book is the lack of illustration throughout. The funnies are often strange looking devices that a wordy description alone struggles to convey. This book really does cry out for better illustration and several other reviews I have read say the same thing.

As already indicated this the book is very informative and clearly very well researched but for me this makes the other flaws all the more disappointing because this could have been a truly great book instead of merely good.
Posted by BigLee at 06:30