Silence of the Lembas Bread 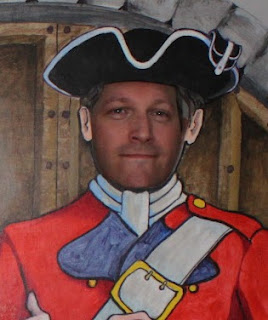 OK, spurious title and no content, that's all your getting from me this week! It's been a very busy few days in work and frankly I haven't got much painting done either lunchtime or in the evening. I have made a small amount of progress  on one model but I'm keeping it under wraps until its finished sometime next week. For a change its not 15mm and its not Flames of War, but that's all I'm saying for now!

Tonight the Dagenham Dungeon Delvers are gathering but I think its going to be a low turnout so we'll probably end up playing something other than our D&D campaign. Still, a games a game and I'm not going to complain about it. At least I won't be thinking about meetings, contracts, clients and Budgets!

So in lieu of something gritty and incisive (I haven't even had time to write much this week) here's a humorous picture of me from last weekends trip to Upnor. Given the cost of replica uniforms and equipment I guess this is the closest I'll ever get to being a reenactor unless I win the Lottery!
Posted by BigLee at 15:31