This Ral Partha Hill Giant dates from 1977 and has spent a long time languishing on my desk in a semi painted state. Its an early Ral Partha figure by Tom Meier and was one of three Hill Giants that were available back when Ral Partha were still a basement business, this one being Version 1 (Reference ES/01-052 v1). Because this is an early Tom Meier Ral Partha figure it was part of its 25mm range ('Heroic' scale or 28mm hadn't appeared yet) but being a Giant it actually stands 50mm from Base to Eye level or 57mm to the top of its head. 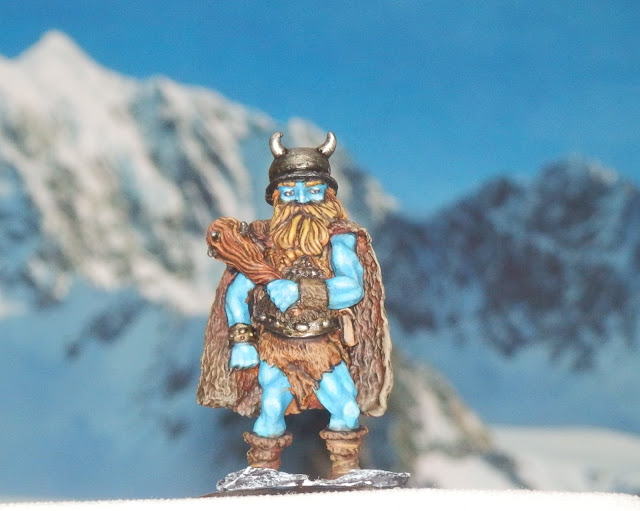 I'm not sure how this Hill Giant came into my possession but it had clearly had a hard life prior to its arrival in my hands. It had been painted and based by another painter but the quality of the finish was poor to say the least. It had taken quite a battering in its prior life and what paint remained on the figure was chipped and worn leaving the model in a very sorry state. It wasn't therefore a hard decision to strip the old paint off and give this model a new lease of life. 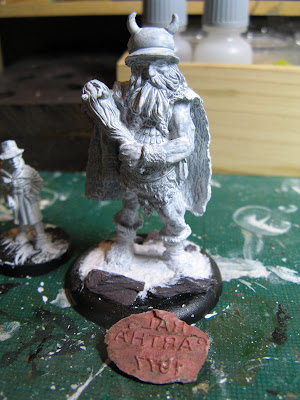 I stripped the model by soaking it in a simple solution of washing-up liquid and warm water. I then gave it a gentle scrub with a soft brush. This process was repeated several more times until all the old paint had been removed. I them made sure the figure was thoroughly dry before priming the whole figure - including the underside of the base - to stop any potential damage from Lead Rot. Because this is an old figure the lead content is much higher than modern figures and therefore much more prone to corrosion. Painting the figure seals the surface and is a very effective means of conservation.

During the clean up process I not only removed the old paint but also broke off a large clay base that had been added by the previous owner. The clay came off quite easily, pretty much in one big chunk. With the metal base cleaned the makers mark was revealed as Ral Partha 1977. I would have been 7 or 8 at the time this venerable old man first hit the shelves and he therefore pre-dates my introduction to D&D and a lifetime of gaming! 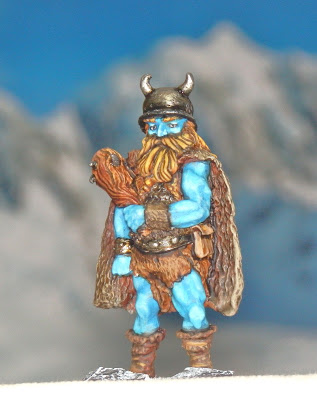 Although this miniature started life as a Hill Giant I decided that I wanted to paint it as a Frost Giant instead. At the time when I acquired the figure I was writing a Dungeons and Dragons campaign to be set in the Frozen North of my Campaign Setting, The Isles of Ethos. A benign Frost Giant was required and this model fitted the role perfectly. But that campaign never came to fruition and the Giant remained semi-painted for a long long time.


In the intervening time I have painted a lot of 15mm WWII figures but now and again I feel the need to paint something completely different just to add a little variety to my art. I've come to a temporary halt on my Panzergrenadier project and was casting around for something quick to paint just for fun when I remembered this model.

Its a beautiful sculpt with lots of character and was really fun to paint. I don't know if this will ever see the surface of a games table but for now its taking pride of place in my rather small display cabinet.
Posted by BigLee at 06:20