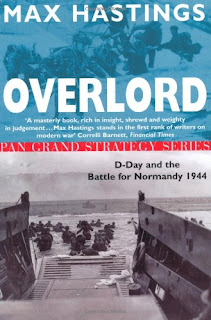 I judge the success or failure of a history book by whether it brings new information and a new perspective to familiar events. I've read several books about the Normandy landings over the last few months, and while the outline of events is now familiar, this book was still able to shed new insight on the summer of 1944.

Max Hastings has built a firm reputation as an erudite historian displaying clear objectivity but with an eye for detail. He also has a narrative style that is easy to read and flows effortlessly across the page. Despite the immense complexity of Overlord, Hastings brings the detail together in a way that gives an overview of the whole campaign while not losing sight of the individual actions that made the whole.

Much has been made by many historians of the apparent failure of OVERLORD to achieve its objectives as planned (ie to schedule). Many books on the Normandy campaign have focused on the blunted offensives of the British and Canadian armies while giving possibly overdue credit to the sweeping success of the US push to Cherbourg and the wild ride of Patton across Brittany. Hastings does not undermine the sacrifices and successes of the American army in Normandy but he does go some way to restoring the image of the British effort on the eastern flank.

Montgomery was often inclined to rewrite the objectives of operations like GOODWOOD and EPSOM to fit the outcomes achieved. This did little for his popularity with other Allied commanders, it damaged his reputation and undermined the post war analysis of the importance of those offensives in grinding down the German Army. Hastings acknowledges that most of the allied offensives up to COBRA did not achieve all that was hope for them but he shows that that was as much because of the quality of the enemy as it was a lack of will amongst the allied troops.


"The Allies in Normandy faced the finest fighting army of the war, one of the greatest that the world has ever seen. This is a simple truth that some soldiers and writers have been reluctant to acknowledge, partly for reasons of nationalistic pride, partly because it is a painful concession when the Wermacht and SS were fighting for one of the most obnoxious regimes of all time."

Ultimately it was Material that made victory possible. The allies poured equipment and supplies into Normandy and losses were replaced almost immediately. By contrast the German forces opposing the invasion grew steadily weaker and weaker in a war of attrition that they could not hope to win.

Some reviewers have suggested that this is the definitive story of D-Day. I disagree, although I do think it is one of the best books on the subject that I have read. To get a truly definitive view you must read more than just the words of one historian, no matter how good his words are.
Posted by BigLee at 09:01