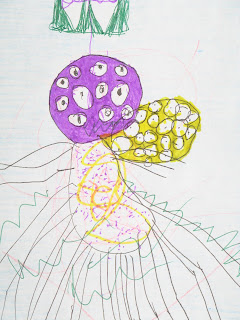 My youngest daughter drew me some pictures yesterday. Most were the usual sort of thing you would expect from a 5 year old; pictures of the family standing outside the house; images of flowers and animals; a nice seaside picture... and then there was this.

Its a great drawing with lots of colour and a big helping of imagination. But is anyone else a little freaked out by the passing resemblance to a Mi-Go from the Cthulhu Mythos? I may be stretching the resemblance a bit but that was the first thing I thought of when I pulled this picture out of the pile. It sent a palpable shiver down my spine. Maybe I'm reading too much H.P.Lovecraft at the moment...

Talking of which I recently read an article that suggests that James Cameron is set to collaborate on a movie version of At the Mountains of Madness. Apparently Guollermo del Toro is teaming up with the Aliens and Abyss director to make what will arguable be a very challenging film adaption. Whatever you think of their previous work (and I'm thinking of Titanic Mr Cameron...shudder) its good to see Lovecraft's work given such a high profile.
Posted by BigLee at 09:01