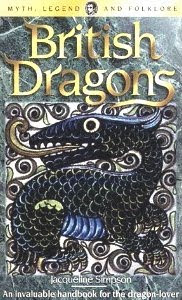 I'm taking a brief rest from reading books about Normandy and WWII. Instead I'm enjoying a charming volume entitled British Dragons by Jacqueline Simpson. This is a very well researched and comprehensive look at the legends and folklore of the British Isles.

The word Dragon is actually derived from the Latin Draco and the Greek Drakon and generally describes a creature that is large, reptilian and often snakelike. Some dragons have four legs, some two legs and some none at all. Not all dragons of legend have wings and neither is fire breathing a requirement, although it does feature in many stories.

Dragons are viewed differently according the the culture from which their myth derives. So in the East dragons tend to be wise, benevolent and associated with good luck. The dragon of the West, and in particular of Northern Europe is strongly linked with malevolence and evil. Dragons are snake like creatures and Christian stories firmly associate snakes with Evil. Therefore most post Christian stories are in effect morality tales wherein the evil of the Wyrm is vanquished by good. 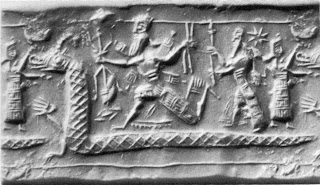 Ancient myths include Tiamat which comes from the Babylonian Creation epic Enuma Ekish which was first written down about 1700BC. However the story itself may have origins going back to 2000BC making Tiamat one of the oldest Dragons to be specifically named. In this legend the hero Marduk kills Tiamat and after splitting her body into two pieces, he set one piece in the sky to create the heavens and the other at his feet to form the earth.

Many Northern legends also associate Dragons with treasure. The stories of Beowulf and Siegfried are the most famous but many local legends also make this connection. British Dragons seem to have a particular fondness for hoards and burial mounds that guard secret treasure. Some stories also associate Wyrms with ancient stones and earthworks. There also seems to be a link with water as many stories refer to rivers, waterfalls, lakes and sea inlets. This may just be the storytellers way of rooting the legend in local geography that the listeners could recognise.

One of my favourite English dragons stories is that of the Lambton Worm. The central character is John Lambton, heir to the Lambton Estate in County Durham. As a young man John was a rebellious character and one day decided to miss church to go fishing. On his way to the river he met an old man who forewarned him that no good would come of his actions. John ignored the warning and went fishing anyway. He failed to catch any fish but just as he was ready to leave his hook found a willing mouth. John then pulled forth an eel like creature with nine holes either side of its salamander like head. John immediately pronounced the creature as the devil and threw it down a nearby well.

John Lambton grows up and eventually goes off to the crusades as penance for his early life. Meanwhile the villagers of Lambton start to find livestock going missing and eventually find that the Worm has grown into a huge Dragon that has coiled itself around a nearby hill. The monster is attributed with eating cows, laying waste to the land and even snatching away young children. In the end the dragon can only be placated by Lord Lambton (John's father) who feeds the dragon the milk of nine cows every day. 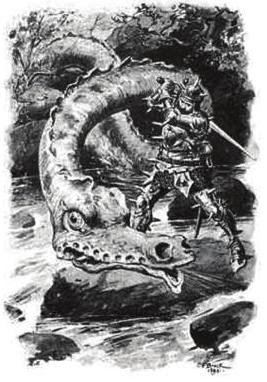 When John Lambton returned from the Crusades he finds his fathers estate in ruins and its people suffering. John realises he is responsible for this situation and seeks advice from a wise old lady (some say a witch) who lived nearby. She told him to cover his armour in spear tips and to fight the dragon in the river Wear, where the dragon has taken to sleeping. However he was also told that he would have to kill the first creature he saw after killing the dragon or else bring down a curse upon nine generations of the Lambton family. To avoid the curse John arranged to blow three times upon a horn after killing the dragon whereupon his father would release his favourite hunting dog. This would run to John and be killed to fulfil the terms of the curse.
When John attacked the dragon it immediately tried to crush him in its coils. As it squeezed its victim the worm cut itself on the spear tip covered armour. The flowing water of the river Wear washed away the torn body parts stopping the dragon from regenerating and eventually it was slain by the brave young Knight. With the dragon vanquished John blew his horn three times to call the hunting dog. But his father, anxious to see his son alive, forgot to release the dog and instead ran to the banks of the river. John couldn't bring himself to kill his father and thereby the curse of the witch fell upon the Lambton family for nine generations.

There are dozens of charming stories like this one in this book and every one is quirky and entertaining. From a gamer and writers point of view this collection of stories is also excellent source material for any game featuring a Dragon or Wyrm.
Posted by BigLee at 09:01