I've been a bit quiet on the painting front this month, having started a few projects and not finished them. This is partly due to the good weather here in the SE of England (Sit inside & paint or take the kids out? Hmmm) and partly due to the fact that I'm feeling a bit lazy. However I have finished one project for May, this "Druid's Altar" from Ainsty. The Ainsty lines have now been taken over by Old Crow who have continued to produce and sell these excellent resin castings. 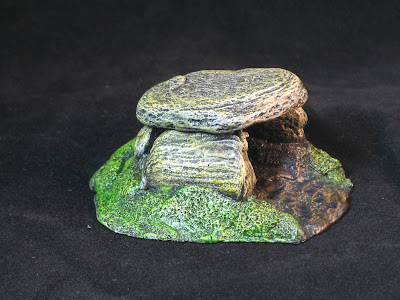 Technically it's not an altar but a Neolithic period Dolmen. This is a type of single-chamber megalithic tomb consisting of three or more upright stones supporting a large flat capstone. Dolmens were usually covered with earth or smaller stones to form a barrow when first built. However the actions of gradual erosion (or treasure seeking Victorian archaeologists) has often stripped the Barrow of its dirt to reveal the stone tomb at its core.

For gaming purposes this could be the site of an ancient treasure; A portal to another realm; or the entrance to an underground dungeon complex.
Posted by BigLee at 08:01