Pirates of the Cursed Seas

Over the weekend I found myself trapped and bored in the Lakeside Shopping Centre in Essex. Just when I thought I couldn't take it anymore I found a small glimmer of salvation in a discount book store. The Pirates of the Cursed Seas Collectable Strategy Game. I've seen this game before but never actually played it. I picked up three packs just to give them a try out and talked my daughter into agreeing to play a game when we got home.

Each pack contains two snap together ships (or sea monsters) and an island or other 'terrain' piece plus various tokens, crew markers and a set of rules. The pieces easily snap out from their credit card sized sprues and are easily assembled in a matter of minutes. The rules are pretty basic but this does mean that you can be playing within a very short time.

Being a typical wargamer I instantly threw out the scenario presented in the rules and devised a 'hunt and destroy' game for myself and my daughter to play out. The game uses a points system for ships & crew so it was easy to build two balanced forces to oppose each other. I took the larger Pirate ship the Prussian Crown which was being hunted by two smaller vessels the HMS Pride and the La Mezquita. 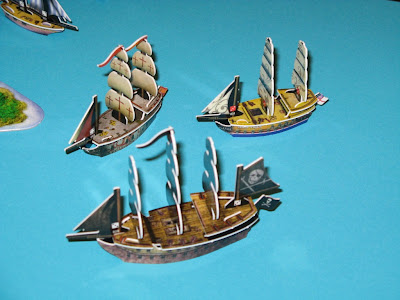 Game play is turn based and very simple. Each turn players may choose one of four different actions; Move; Attack; Explore (plunder); or Repair. My aim was to use the small islands as a shield and divide the smaller and slower vessels so that I could destroy them one at a time. Initially this tactic seemed to work as I pounded the HMS Pride with my five cannon to her three. Unfortunately she was able to escape long enough to make repairs. In my eagerness to destroy the crippled vessel I closed with her but stupidly put myself between both enemy vessels. I should have been able to take their combined fire but a series of excellent dice rolls by my Daughter soon saw the Prussian Crown mastless and sinking. 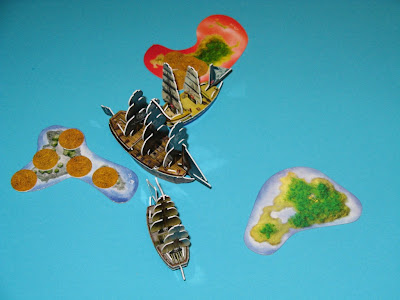 This was a very simple game to play but was great fun - even if I did loose to a thirteen year old! I will certainly be purchasing more packs of this game to increase the choice of vessels and terrain elements. And as for the rules... I am already formulating a more 'advanced' rule system to make future games more interesting and challenging.
Posted by BigLee at 09:26