My buddy the Lizardman

A few days ago I reported that I was rereading the Basic D&D rulebook with a view to possibly re creating my gaming groups first ever game. I mentioned that I had a Lizardman model from that very first game and that I was debating whether to paint it or not. A few people have expressed an interest in seeing that Lizardman so here he is. 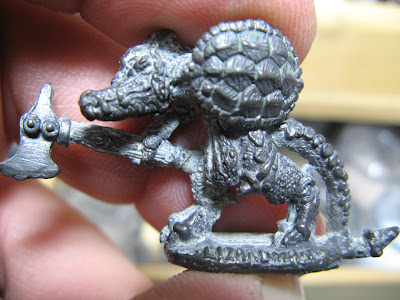 I'm still undecided whether to paint it or not. This model has acquired quite a bit of sentimental value for me and I'd hate to ruin it with a terrible paintjob. However it may be time to consider painting the model as a form of conservation, to preserve it for years to come. This mini has a much higher lead content than modern miniatures and consequently has some of the white powdery bloom which is often called lead rot but which is actually Lead Carbonate. This is a form of corrosion which, in this case, seems to be fairly limited and doesn't look to have damaged the surface detail a great deal. 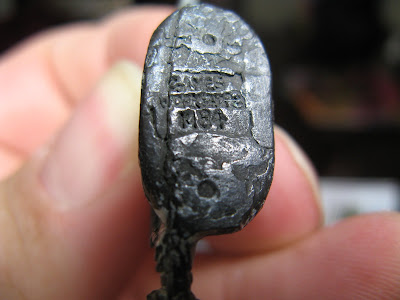 Incidentally this miniature is a pre-slottabase Games Workshop model date stamped 1984. I was surprised when I saw this because I was sure we started playing D&D earlier than that. So when I say I've been playing for nearly 30 years (a figure I have oft quoted in this very blog) what I actually mean is 25 years. Caught in the web of my own deceit!
Posted by BigLee at 08:01