Humor in gaming is something that often seems to divide opinion. How much humor is appropriate and when does an excess of it interfere with game play? Well from a GM's point of view anything that stops his players from hearing his carefully prepared monologues is a bad thing. But as a GM I'd rather my players were not listening because they were laughing than not listening because they were distracted by something else. My gaming group the Dagenham Dungeon Delvers are a case in point. Laughter is prevalent throughout our games and often the GM has to repeat himself because players are laughing rather than listening. And although the GM might occasionally want a little more serious gaming to take place, we rarely consider laughing, jokes and ad libs to be detrimental. After all we are gathering together to have fun.

One of my favorite D&D characters was a huge Half-Orc called Bilious Green. I definitely played Bill for laughs and as such he has become a 'Legend' often talked about when we reminisce about old games. Bill was thick as two short planks, acted first and never thought later, and generally caused a lot of chaos wherever he went. He was a great character for shaking up an encounter, mainly because he wasn't a conversationalist. Unfortunately this talent was not always appreciated by his compatriots (or the GM). I also liked this character because I got to paint this great model. 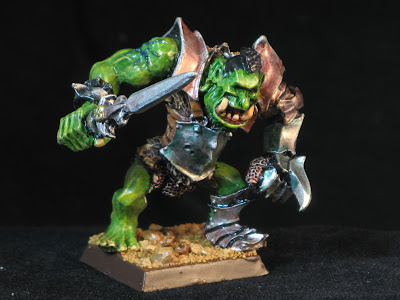 One of my favorite moments was when Bill tried to open a magically trapped door using a tree trunk as a battering ram. The rest of the group had spent half an hour trying to figure out the clues to what turned out to be a simple trapped lock. Bill was bored, and that was never a good thing. So while the other adventurers puzzled over the letters inscribed on the door (each of which was trapped with a Lightening Spell) Bill went off to find a suitable "lock picking tool". He returned a few minutes later carrying a tree trunk under his arm and then, ignoring the panicked pleas of his companions, charged at the door hitting dozens of the trapped letters simultaneously. He woke up ten minutes and thirty feet later, still smoking but alive. Ah yes, fun times!

Bill was last seen leaping through a magical portal yelling "YeHaa!" at the top of his voice.
Posted by BigLee at 08:01