Covering Fire Markers (and other things)

I seem to have had a burst of productivity in the last week and got quite a lot of little projects completed in a relatively short period. I'm really enjoying getting into the Chain of Command rules and have been working on various projects to expand my options in the Normandy / NW Europe Theatre of WWII. I will be buying some new troops - possibly to work on in the next Analogue Hobbies painting Challenge which starts in December - but for the time being, I decided I needed some extra terrain. 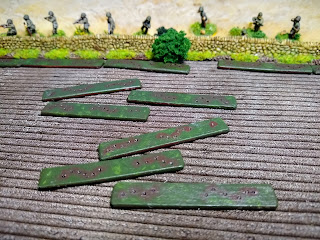 Last weeks Chain of Command game (Sgt O'Reillys Charge) made me realise that I needed to get some covering fire markers to show when an area of cover is being targeted. I did find some commercial markers (by Likto) but they were already expensive before applying international postage so I decided to make my own instead. In all likelihood, there may only be one or two areas being targeted in this way in the average game but I made enough to allow for covering fire from three whole squads (each covering 9" of terrain). That should be ample, but to be honest, they were so easy to make I could knock up more quite quickly if needed.

My base material was the humble lolly stick, cut into roughly 2" lengths. I then sanded the ends and corners to make them smooth. Using a Dremmel I drilled a series of shallow bullet holes in each piece and then base coated in Flat Earth (983). The ground was then dry brushed with Reflective Green (890) and Olive Green (967). I then went back and dabbed in some black to emphasise the bullet sholes using a fine nibbed art pen. The last step was a little flat earth around the bullet holes. When all of this was dry the usual Gloss then Matt varnishes were applied. The whole thing took about half an hour to make and paint and another hour for the varnishing.

The next big job following the game was to work on expanding the existing Index from the rulebook. The rules are brilliant and necessarily detailed but the index for finding them isn't as good. I had a mare of a time trying to find the rules on covering fire for instance. I knew I'd read them but couldn't locate them in the book when I needed to check the wording. Thankfully I never had to do the index because Dick Bryant (of Kingston Irregulars) came to my rescue, offering to share an index he had. It's saved me several hours of work and has made navigating the rulebook a whole lot easier! 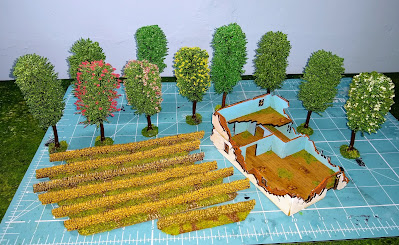 With a considerable amount of time saved, I decided to make some progress on a few terrain items that I wanted to finish. First I bought a cheap MDF ruined building online which needed painting and assembling. It turned out the reason it was so cheap was that the laser cutting wasn't as precise as it could have been and required some on-the-job alterations to fit together. Considering it never came with any build instructions I don't think I did a bad job. I added some extra detail with rubble and weeds building up in the corners of the ruin and the end result is a very useful bit of terrain for CoC games. Slightly less challenging was painting a new set of field walls to match the ones I have already and rebasing some very cheap trees I found on eBay. The latter aren't brilliant quality (they were a bit top-heavy for a start), but at just a couple of quid for eight trees, I couldn't ignore them. I rebased the trees on some metal washers and after adding some turf and tufts they look a little better... and crucially they stand up now!

The next project is already underway, with the arrival of some vehicles from Skytrex. I haven't bought stuff from this company in years and I'd forgotten how nice their models are. I'm currently prepping a Panzer III M and an Sdkfz 222 Armoured Car for the Germans, and an M20 Utility Vehicle and an M5 Light Tank for the Americans. I'm taking my time with these so expect to see them 'revealed' over the next few weeks.