First Playtest with Chain of Command

Last week I published a video on my YouTube Channel about learning new rules and I guess that means I have to put my money where my mouth is and learn a new set of rules! Actually, I can't really call Chain of Command a 'new' set of rules because they first hit the hobby scene in 2013, and I bought my copy over four months ago. Since then I have been converting some of my 15mm Flames of War figures for use with this ruleset while trying to learn the rules. As I explained in my video, I find it very hard to just sit down and read a rulebook, so I have been watching a lot of how-to videos, playtesting and otherwise 'dabbling' with the rules on my own. Now its time to play a proper game, bringing together the various elements I have been working on over the last few months.

I started by setting up the table, making use of my recently completed ploughed fields and wheatfields, along with my collection of homemade Bocage hedgerows and gates. My table is a bit small for this game (just 4' by 2'6") although I have plans to make this a little bigger in the future. Despite this, it is still just about big enough to play a solo tester game on and start reviewing my understanding of the rules, figuring out what I don't know or don't understand. 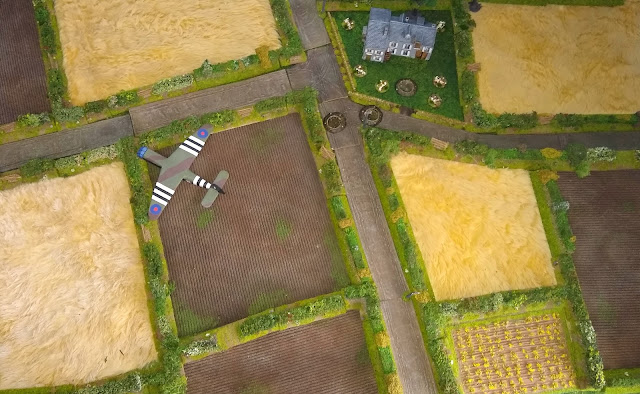 Space is a bit tight in the Operations room at the moment, what with it doubling as my work office two day a week and a studio for the YouTube Videos I have been doing as well as my painting and gaming space. Just moving stuff around is an intricate dance, shifting boxes from A to B and moving tripods and stands...the list goes on. I expect I'll be spending more time in my actual work office soon so I can get my operations room back into some sort of order and use it as intended, i.e. for gaming! In the meantime, I'm having to use some of my storage boxes as a temporary table for dice, tokens, figures and Morale Trackers. 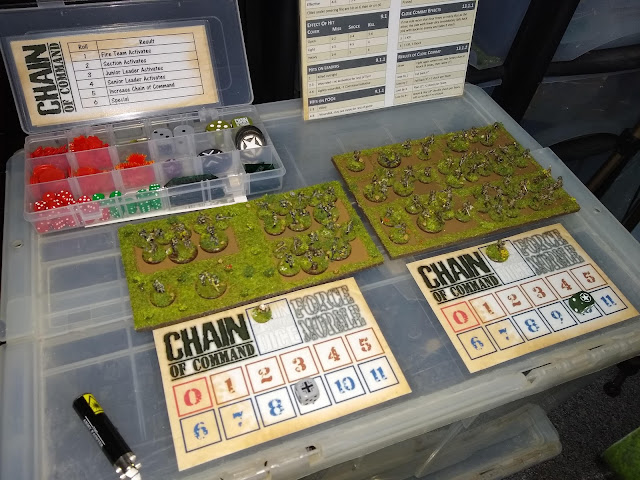 So I started on the playtest game and decided that because my table is a bit small I would use only three Patrol Markers per side in the Patrol Phase of the game. The Americans were able to secure an important field dominating the road junction while the Germans were pretty much relegated to the edge of the table. 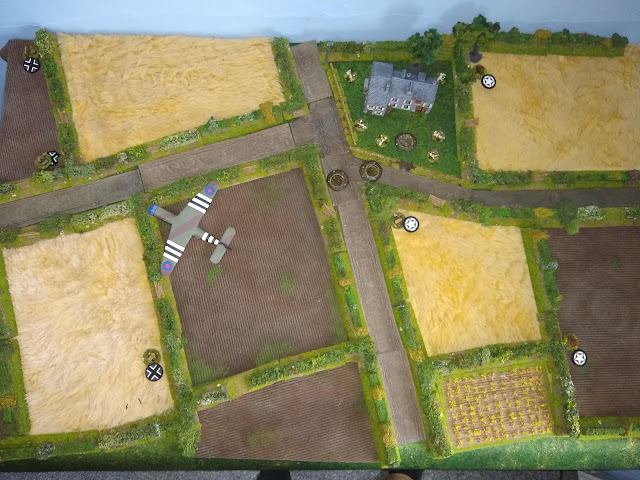 The Panzergrenadier HQ and one of the MG Squads deploy in a field next to a crashed Glider. The point of this 'game' was for me to test myself and find those bits of the rules that I was unclear on (a lot as it turned out!). One of the things I think I need to do is highlight some of the bases for leaders to make it easier for players to see. They are on slightly larger bases than the infantry, but its sometimes not very clear so I think a coloured band on the base edges will be helpful. Another thing I think I will do is make some Squad ID labels, again just to make it easier to remember which squad is which. This isn't required in the rules but I'm thinking of running this game system for the Rejects using Zoom and I think it would be helpful. 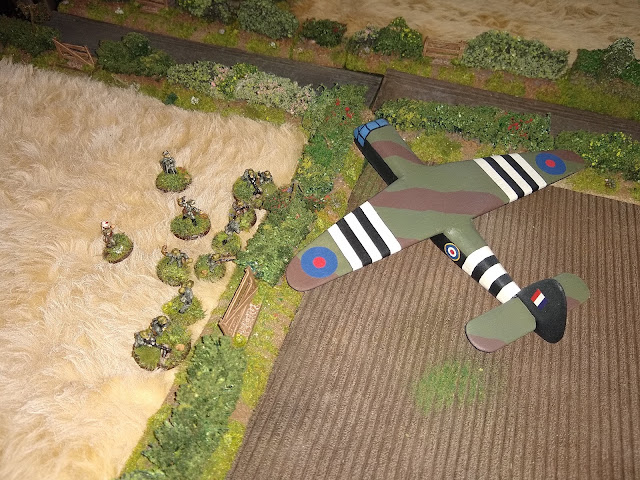 The German HQ and its associated Squad have a large field to cross, but at this early stage of the game, the Americans haven't managed to occupy the farmhouse so there is no LOS on this area. This helped teach me an important lesson about the order in which units should be deployed and in the importance of securing a good fire position early in a game. 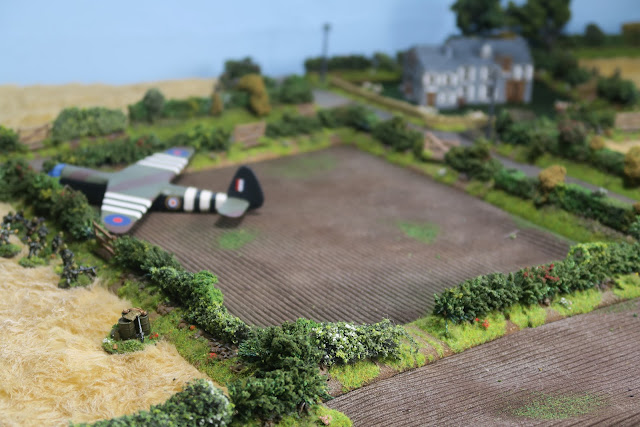 An American MG Squad can be seen behind the hedgerow next to the house. I should have moved these early in the game to capture the Farmhouse. 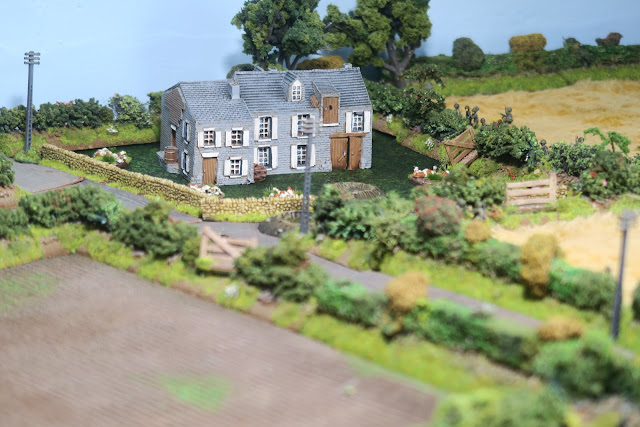 As the game hots up there is a LOT of close quarter shooting taking place. However, with everyone in Hard Cover casualties are relatively low. Shock, however, starts to build as combat fatigue begins to become a factor. I know this is a rule the TfL have used before and I really like it. 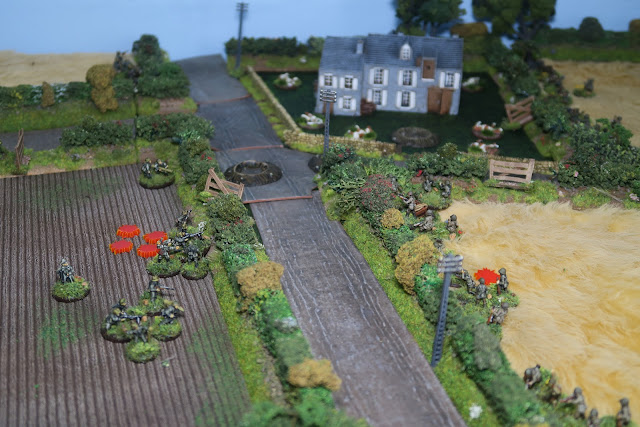 One mistake I made early on was forgetting the supporting teams in the same squad (ie within 4" of each other) can share Shock inflicted on a one exposed team. As I said, this is a test game and when I realised my mistake I redistributed the shock markers to both teams. 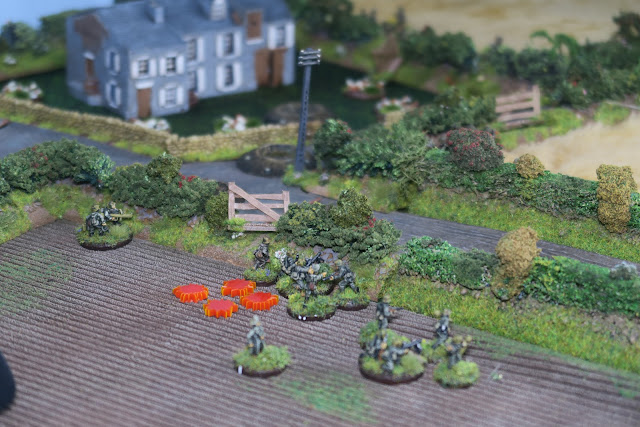 I played this test game a little at a time over three days (the advantage of having a dedicated games room) so it was inevitable that I would stop and pose for a selfie at some point! 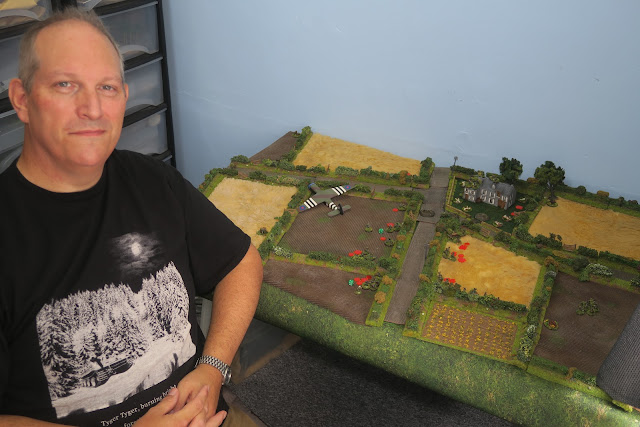 Because this isn't a proper game - it's more a training exercise for myself - I didn't take as many pictures as I would normally, and didn't fully finish the game. I did get a chance to play out my first Melee, with the Germans overextending themselves in an attempt to capture the farmhouse and then getting counter charged by overwhelming numbers of Americans and basically having their backsides handed to them.

After that encounter, the Panzergrenadiers were in a dreadful position, bleeding troops and now overlooked by American MG's firing from the upper floors of the Farmhouse. Eventually, I reached a point where I decided I had learned enough from this test game and brought it to an end. However, I have decided to keep the layout largely the same and immediately play another test game with the sides swapped around. I'll start from the beginning again, carrying out the Patrol Phase and seeing if I can play with fewer mistakes next time.

So what have I learned from this solo test game? First, no matter how much I try to read and absorb the rules, I really learn from playing with them. Second, I need to keep a list of rules or topics I am vague about, so I can focus my attention on those bits of the rulebook. Thirdly I have found navigating the rulebook a little confusing at times so I think I'll add some 'tabs' to key pages in the rulebook so I can jump to them quickly. The fourth thing I already alluded to, highlighting the leaders a bit more so I can see them easier on the games table.

I expect I'll have to play quite a few more games like this to 'master' the rules. Certainly, I need a better grasp on them before I try to run a game of CoC for the Rejects. Looks like I have my work cut out for me over the next few weeks!