This week my painting has taken a brief turn away from WW2 and chain of command. Earlier in the year my mate Stuart (aka Postie) gave me a figure of a bear. It's a bit of an in-joke so I had better explain. Postie has often run some very large French Indian Wars games in the shed-o-war and in one notable game my leader figure woke up a very angry bear. The movement wild creatures in his rules are entirely random but I was unlucky and the bear ended up close enough to my troops to charge. The ensuing melee with my leader and his lieutenant was brief, bloody and decisively in the bear's favour. In short, my leader and two other characters were eviscerated. The incident has gone down in Rejects lore and is often referred to! 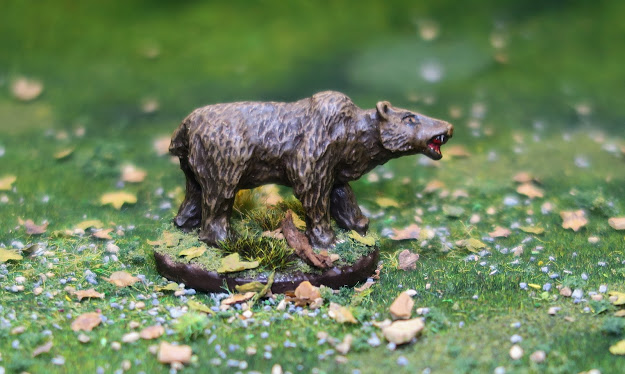 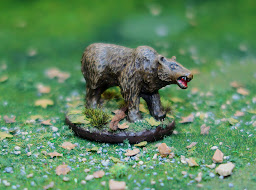 The bear miniature was a very simple paint job and will no doubt feature in a future game or two here in the Operations Room. I was considering giving it a snowy base for use in my Frostgrave Game's, but in the end, I decided to give it a woodland base in hommage to the bear that it was inspired by.

Talking of bears, I highly recommend watching The Revenant. This 2015 American epic Western action-adventure starred Leonardo DiCaprio and although it was set in the 1820's - some 60 years after the French Indian Wars - I felt it was very evocative of that whole frontier period. In the film, DiCaprio's character is attacked by a bear and whenever I see that scene, I always think of that fateful game in Posties shed. It makes me wince just thinking about it!