With the Painting Challenge over its time, I started to play with the stuff I painted, so I challenged the Young Padawan to our first proper game of Frostgrave. This was a bit of a tester game just so we could get to grips with the rules. I put together two Warbands, one of Dark Elves and another of Humans and then let her choose which she wanted. She went Dark Elf of course and then we started.

The Setup
This is part of the temple quarter of the city, and both warbands are converging on the Hall of Heros and its associated graveyard. There are several buildings but the centre of the table is fairly open. 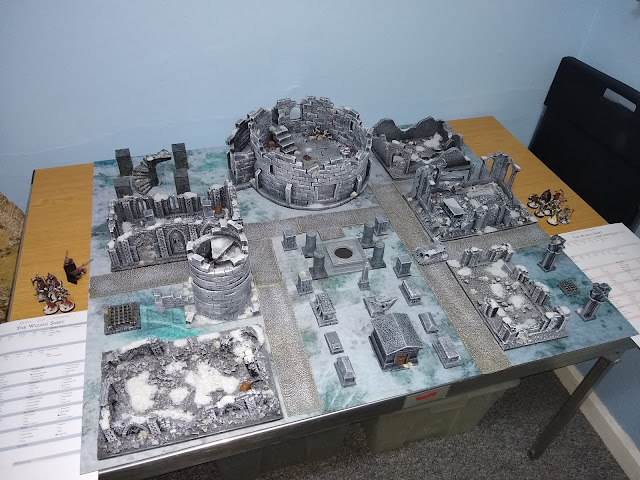 The Action
So both warbands start from their respective table edges but each was allowed to split their men between the Wizards and Apprentice as they saw fit.

Analysis
Once again my Daughter, the Young Padawan, has shown she's no Padawan any more!

It was a good game, even if my ego took a thorough battering. We soon got the rules more or less fixed in our heads and play was swift and relatively uncomplicated. I'm already looking forward to another game. Unfortunately so is my teenage Sith Lord in training. Sigh...
Posted by BigLee at 20:32