Over the weekend Postie ran a WWI game using his homebrew rules, Home for Christmas. This focuses primarily on the opening months of the war before the conflict got bogged down in trench warfare. We've played a few games with these rules, and ran a demo game using them at Broadside a couple of years ago, and they work really well. For this game, Richard and I would face Surjit and Ray in a very long and drawn out tussle.

The Setup
The game is set during the Second Battle of the Marne and sees the French on the attack against a weakened and dispersed German force. When the game opens the Germans are massively outnumbered but unbeknownst to me and Richard (because Postie doesn't tell us these things) we had a lot of reinforcements that would arrive steadily during the game.

Order of Battle
Ordinarily, I would type out the order of battle, but I have a growing list of things to do tonight and decyphering Posties handwriting isn't on it! 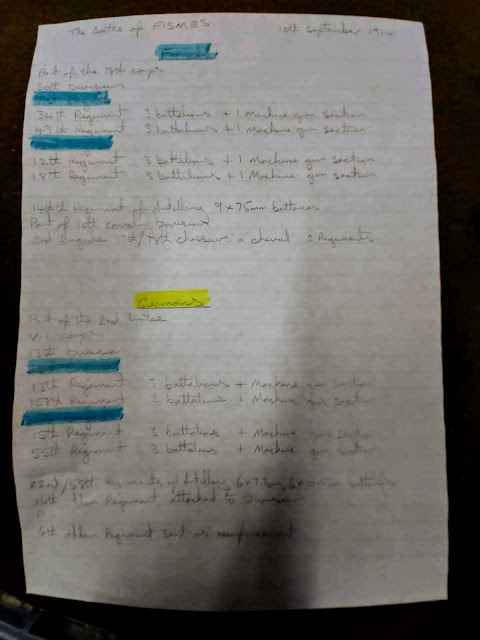 
Analysis
Postie added up points for objectives and lost units and...drum roll please...declares the game a draw! Both sides are equal having fought each other to a standstill. While it would have been good to have had a clear winner the fact is we all enjoyed the game and both armies were largely spent by this point. Time to start digging trenches boys!
Posted by BigLee at 08:30