Another day and another stroke of genius and/or madness (delete as applicable). I make a lot of my own terrain but I am not above buying pre-made items at shows. The problem with this approach is that painting styles and colour can vary a great deal between pieces. Personally this doesn't bother me all that much but with the prospect of having to put on a demo game later in the year I decided I needed to improve the 'visuals' as well as put on a fun game. Consequently I have spent a lot of time over the last few months repainting terrain to bring all the varied styles together.

Some time ago I bought a felt gaming mat and gave it a repaint to give it a more natural look. I was contemplating painting desert scrub bushes on the mat but in the end I decided to glue actual tufts to the mat (yes, this is as laborious as it sounds!). The end result looks excellent makes a good background for all the terrain I will put on it.

On top of these I have a load of hills that I bought from TSS. The base color blends well with the game mat but I also added some shading in a similar paint job to the mat. These have also been had grass tufts glued to them to represent the bushes prevalent in the north African desert. Strangely the photo below looks a different color to the picture above but trust me, they are the same shade. 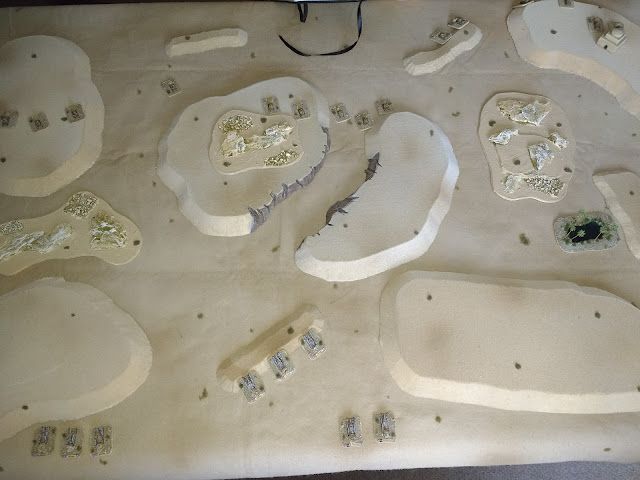 Back in October I bought some excellent terrain from the Bring and Buy stalls at SELWG. Although painted in 'desert' colours the effect was far more yellow than my existing terrain. Several pots of Vallejo Iraqi Sand (819) were used in the transformation process. I also added my usual grass tufts to these (MiniNatur/Silfor, Late Fall 717-24s) again bringing them in line with the overall theme. The next step is to tackle more of my bought terrain. I have about 12' of Wadi (dried riverbed) that needs the color revamp. The models are great but I don't particularly like the way they are painted at the moment anyway, so redoing them in my color scheme will mean they get used a little more often!

The end result of all this effort is that my collection of terrain now looks like it is part of a unified set when I use them in combination. The Young Padawan has been asking to play some more desert games and I can hardly disappoint her can I !
Posted by BigLee at 19:23