Earlier in the week I posted my latest batch of Romans, this time some Generals to lead my army. While I was photographing them I decided to put the whole army on the table, the first time I have gathered them all together like this. I have to admit to being a little impressed with the relative speed with which I have completed these.

In the front are the Generals with six units of Velites shielding the front of the army. Behind these are the three ranks of Legionaries typical of the period, consisting of Hastati, Principes and Triarii at the rear. Flanking the army are cavalry and Bolt throwers. One thing I have realised now that I have these on the table is that the units labels on the Principes are on the wrong side of the base (on the right rather than on the left). Doh! I'll remove and reapply these next time I have half an hour free. 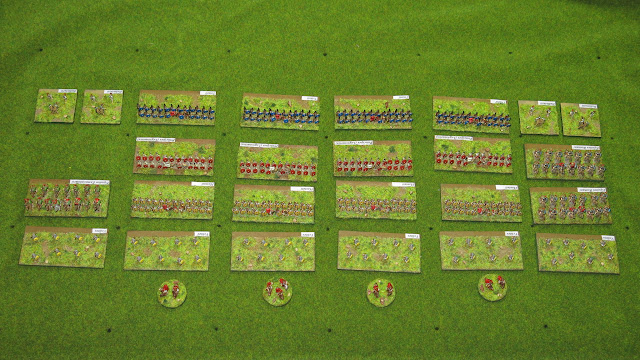 I will add some Italian Allies at a later stage but for now I need to work on building up my Carthaginian forces so that I can have a few games. Once we have played a couple of battles I think I'll be in a better position to consider what the army lacks and therefore what units to paint next.

One thing that is definitely missing at this stage are camps and/or baggage. Once I have a few Carthaginian units under my belt - and once the Challenge has finished - I'll look at make a camp for each side.
Posted by BigLee at 08:13