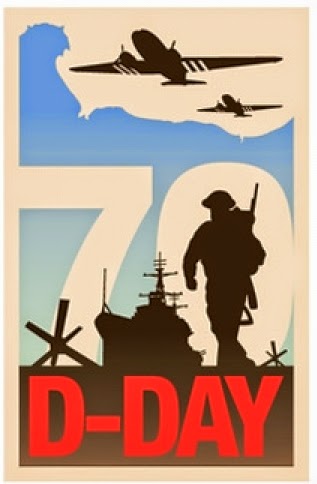 Today is the 70th Anniversary of the D-Day Landings in Normandy, Northern France on the 6th June 1944. Operation Overlord was described, for good reason, as the greatest seaborne invasion of all time. Dwight D. Eisenhower lead over 156,00 men in the assault on Nazi Europe and despite at least 12,000 casualties (of which 4,414 were confirmed dead) succeeded in establishing a bridgehead from which the Allies were able to begin the process of liberating Europe. Many Veterans - men now in their 80's and 90's - will be back on the beaches today to commemorate the great sacrifice and great courage that was shown on that most momentous of days.

I recently helped at a fund raising day for Veterans planning on returning to Normandy and the greatest privilege was to be able to chat with these guys and listen to them share their experiences. I made a point of shaking each mans hand and sincerely thanking them for their bravery and their service. I come from a generation that on the whole has not experienced war or hardship and we owe a large part of that to the courage of men (and women) on that "day of days" 70 years ago.

With the D-Day 70th Anniversary commemorations taking place today I thought I'd share a few pictures of my favourite D-Day related wargames that I have seen over the years. Operation Overlord is one of those events in history that is such a massive undertaking and of such huge importance that sometimes it can be hard to take in. Massive amounts have been written about the Normandy Landings and there are countless personal stories, diaries, unit histories, photographs and documents for historians to ponder over for decades to come. But one way in which this period in history can be broken down and understood is through the medium of Wargaming. I'm not for a minute suggesting that wargaming D-Day is somehow more important than the great and scholarly work of historians, but they are another way of understanding a particular moment in the battle and really 'connecting' with those events.