I have been busy painting up a load of new tanks for my North Africa project, this time five Troops of Crusader II's (The nomenclature of British tanks can sometimes be a bit confusing with the Crusader II also being known as the Cruiser Tank Mk.VI and sometimes referred to by the General Staff specification A15). These cruiser tanks are synonymous with the desert where they saw extensive service through 1941-42 until superseded by the arrival of more reliable American tanks.


Designed by Nuffield in 1939/40 the Crusader was rushed into production without going through a prototype stage to work through developmental problems. The result was a tank that fulfilled the War Office specification for a fast cruiser tank but which came with a shopping list of faults and weaknesses that would plague this tank throughout its service life. The turret for instance did not have a Commanders Cupola which severely restricted visibility. The cooling system was quickly eroded by sand and proved inadequate for the environment it was expected to operate in. The Crusader also endured all the usual mechanical problems of operating over the vast distances, with wear and tear resulting in oil leaks and damage to engine blocks. The turrets angled underside also created dangerous 'Shell Traps' resulting in incoming AP rounds deflecting into the roof of the tank or even lifting the turret out of its ring. 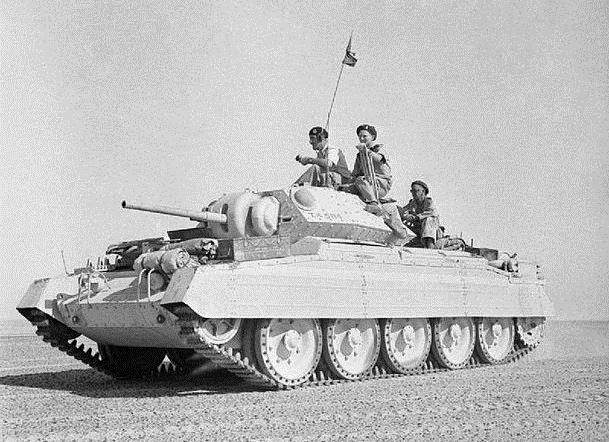 The main 'fault' with the Crusader however was its gun. When it was designed the 2pdr seemed like a suitable Anti-Tank weapon but by the time this vehicle started to see service the gun was already starting to become inadequate. Later models were upgraded with a 6pdr gun and by that stage American tanks like the Grant and Sherman started to appear in larger numbers. Meanwhile German tanks were being upgraded with thicker armour and the 2pdrs inability to fire HE meant it had limited value even against non armoured targets.

The one major advantage of the Crusader was its speed. All cruiser tanks were designed to be fast and gun crews were taught to fire on the move. The gun in the Crusader was balanced with a padded shoulder pad that the gunner lent into. He could them move and aim with much greater fluidity making shooting on the move much more accurate. Indeed this was the popular doctrine of armoured tactics for the British Army at that time, but predicated upon the assumption that the 2pdr AP shot was sufficient to take out the targets presented to it! Rommel, ever the opportunist, used this tactic to his advantage by using his Panzer's to provoke British tanks into a charge, using a feint retreat to draw them within the range of an AT gun screen (usually PAK 38's and 88mm AA Guns).

Although the 2pdr gun on these tanks isn't a big hitter when compared to some of the Axis tanks they will be facing these cruiser tanks have a couple of advantages in the rules that give them an edge. Firstly they are Fast Tanks, meaning that if they make an At the Double move thay can cover an incredible 32 inches! The downside is these vehicles are also Unreliable and may bog down (or more accurately break down) on a roll of a 1 if they make an At the Double move.

The real edge however comes from the Tally Ho rule which reflects the British armoured concept of shooting on the move. These tanks can fire at their full ROF even if they have moved and providing their targets are within 16 inches. So a platoon of Crusaders can literally charge across the table, get up close and personal with the enemy and blast away at them. Personally I wouldn't recommend this against German panzer's (unless you could get behind them and hit their weaker rear armour) but facing much weaker Italian tanks this could be a deadly tactic.

The Crusader always seemed to me to have evolved out of the rather confused thinking of the interwar period where tanks were seen either in Naval terms as lumbering landships or as a successor to the Cavalry Regiments sweeping into battle on iron steeds. Long before the concept of the Main Battle Tank was conceived, British designers had settled comfortably into the conceit that the army needed two types of tank; slow and heavily armoured Infantry Tanks and faster lightly armoured Cruisers. The result was a series of models of variable design quality that were each so specialised that up-grading, up-armouring and most importantly up-gunning proved extremely problematic.

For all its disadvantages the Crusader played a vital role in the British Army, if for no other reason than it was an essential step in British tank design capabilities and it was an important part the lineage that would eventually lead to the development of tanks like the Comet and Centurion.
Posted by BigLee at 06:50