Satire or just another Stereotype?

Our hobby often gets wrongly maligned and insulted by those on the outside, in the so called 'real world'.  Its a sad fact that articles mocking the hobby or stereotyping its participants appear with tedious regularity. I've been a Wargamer and Roleplayer for over 30 years now and the phenomenon of 'jocks' picking on 'geeks' has never really gone away, even as society has supposedly become more enlightened and tolerant. That's not to say that 'geek culture' hasn't become more mainstream over the years but despite this there are still plenty of journalists out there that feel the need to portray wargamers as weird loners still living at home with their parents. Unfortunately there are also a few writers who have come from within the hobby that have also joined this narrow minded and facile band of hacks. 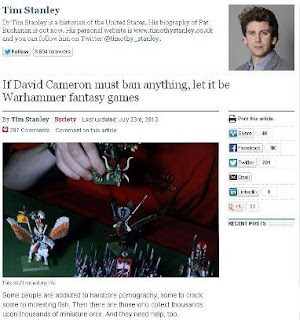 So what has prompted this little outburst of mine? This article in the Telegraph prompted one blogger (Porky's Expanse!) to rightly refer to it as a "joke piece" (read his full his post here). As this subject often gets me worked up I decided to leave this comment:

I fear that the net effect of articles like this reinforces stereotypes, marginalises players and damages the wider hobby (which, btw, is worth tens of millions to the economy)."

I guess what hacks me off the most is that this journalist probably thinks he's being very clever, juxtaposing geek culture and politics in a mildly humorous fashion, and personalising the article by referencing his own involvement in the hobby. Clearly he's not nearly as clever as he thinks he is because by personalising his article in this way he has managed to turn this into an attack on the hobby and on the person he used to be (before he became an idiot and a journalist). Many people will read his article and see it as a weak attempt at satire, but a lot more will subconsciously (or even overtly) see this as a vindication of the harmful clichés they so desperately cling to.

Mockery isn't 'harmless' because it reinforces prejudice, marginalises people, suppresses creativity, stifles enterprise and lowers self worth. This is why so many Bloggers go to great lengths to remain anonymous, using nicknames or pseudonyms instead of their real names. I totally understand their decision, and its one that we all have to make based on our personal circumstances, but its still a sad state of affairs when gamers must suppress who they are because the people around them are still influenced by derogatory stereotypes.

I've written about this subject many times before (notably here and here) and sadly will no doubt do so again in the future, but as you have probably guessed by now I feel pretty strongly about this. I'm fed up of our hobby being the butt of shallow and pointless jibes and anyone that enjoys that hobby being labelled as socially retarded losers. The real losers are those people that live ordinary dull boring lives with 'regular' hobbies, shackled by conformity, devoid of curiosity, stifling any hint of creativity.  I have met thousands of gamers over the last three decades and every one has been passionate, talented, inquisitive, creative and generous. These are the stereotypes we should be reading about, not that other puerile rubbish.

Come over to the Dark Side losers, we have cookies.
Posted by BigLee at 14:04