The Dagenham Delvers gathered on Friday and played our way through a trio of boardgames that ranged from the funny to the bizarre and the excellent. Playing multiple games like this in a single evening gives us a chance to evaluate and assess which ones we would like to see come back for more in depth games. More importantly it lets us know which ones should be avoided!

Killer Bunnies and the Quest for the Magic Carrot - What can I say about this rather strange game? Well for a start its not the sort of game I would have expected to find myself playing at a gathering of the Delvers. First published in 2002 by Playroom Entertainment it is for two to eight players and the manufacturers give a suggested aged suitability 13 and up (although the game is simple enough to be played by much younger kids). Games take between 60 and 90 minutes although a lot depends on random chance and the number of players. Its simple and fun to play with an emphasis on cartoonishly grisly deaths for your own and opponents bunnies. One the things I liked about the game was the fact that you play your cards two turns in advance, making planing vital. A fun 'popcorn' game aimed at families... or desperate former roleplaying groups in need of en evenings entertainment.


Relationship Tightrope - I have absolutely no idea why John even bought this game, let alone why he brought it along to Game Night. But having brought it along we decided to give it a go.  The aim of the game is to keep your relationship in balance by bidding against the other players for coloured markers (you guessed it, blue and pink). Pairs of opposite colours cancel each other out so the player with the least tokens of any colour wins. Lets just say this is possibly the most sexist game I have ever played, with all the artwork on the cards seeming to depict every gender stereotype its creators could think of. It was so bad it was almost funny. Almost. Trust me when I say we won't be playing this again.


Settlers of Catan - The last game of the evening was the popular and award winning Settlers of Catan. We should have got this game out earlier because we really enjoyed it. The game mechanics are quite simple but the complexity of interactions with other players makes this an addictive game to play. For the new players this was an easy game to get into although we could probably have done with a second game to really get into it.

All in all a pretty fun evening improved by the fact that we ended on a high note with Settlers. We will definitely have this back for a future session, assuming we can scrape together enough players that is! 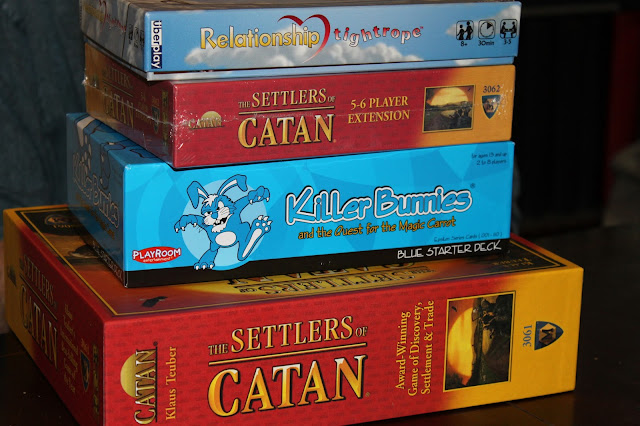