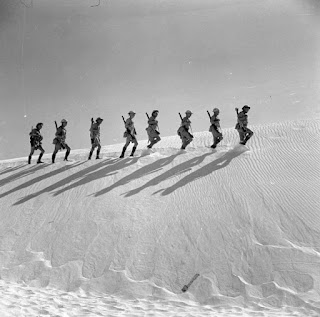 The desert terrain of the North Africa Campaign was probably more varied that many people realise. Uncomplicated by a civilian population and the accompanying infrastructure the desert was none the less a varied and difficult place to wage war while being perfect for the sort of wide sweeping manoeuvres of armoured formations. I have been slowly building up a collection of (usually) scratch built terrain for my North Africa games and one item that was missing was Sand Dunes.

Dunes can come in a range of sizes and shapes, can be found singly, in clusters, or as part of massive 'Sand Sea' features covering many square miles. I decided I wanted to make some smaller individual versions, still large enough to block line of sight and be hazards to movement. These could be placed together to form an 'area' terrain feature or be placed separately.

The basis of these dune models was a set of Ice Cream sticks which are about 3 Inches long by ¾ Inches across. I used a pack of DAS modelling clay bought from a local arts and crafts store (£3.99 for 1kg from The Works). This clay is sealed in foil and is ready to use straight from the pack. It air dries to a hard durable Matt finish without the need for firing, which is ideal if you don't happen to own a kiln! The best thing about this clay is that it doesn't shrink as it dries and once hard it it can be painted with acrylics.

I bought some sculpting tools but in the end I found the easiest way to mould the clay was by hand, using wet fingers to shape the dunes. It only took a few minutes per model to create the distinctive dune shape which is longer on the windward side, where the sand is pushed up the dune, and shorter on the slip face in the lee of the wind. I used a soft wet brush to smooth out any fingerprints in the clay and then just left the model to dry for 24 hours. I actually put these in my boiler cupboard, which is warmer and dryer than room temperature, to speed up the hardening process. I decided not to apply sand to the surface as at this scale it would make the dune look like it was made from rubble. Instead I just painted the clay and used shading to emphasis the dunes shape. The finished models were then varnished with Winsor and Newton Gloss Varnish for toughness and then a couple of layers of Testors dullcote to give them a flat matt finish.

I'm really happy with these. For such a simple build they look very effective on the table and afford some much needed cover and obstacles on the battlefield. I still have about 750g of the clay remaining so I'll be making more dunes and other terrain items from this material in the near future.
Posted by BigLee at 08:55