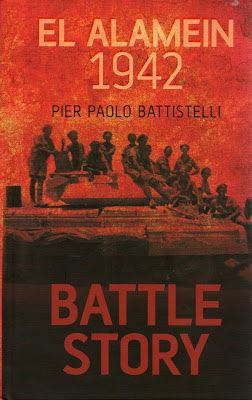 I saw this book several weeks ago and decided to buy it primarily because I had read other works by this author and knew it would be a good read. Pier Paolo Battistelli earned his PhD in Military History at the University of Padua and is a scholar of German and Italian politics and strategy throughout World War II. He has written and collaborated on several Osprey guides about the Afrikakorp and the North Africa Campaign and is a contributor to the Italian Army Historical Office.

The book is divided into several sections which lay the foundations for a good broad overview of the campaign and the battle itself. Starting with the background to El-Alamein the author looks at the North Africa Campaign up to this moment and makes the observation that the weakness of the supply chain meant that despite seemingly huge advances by both sides neither was able to gain a decisive advantage. Rommel's failed offensive at the Battle of Alam el Halfa - and Hitler's refusal to allow Rommel to fall back on his supply lines - gave the Allies under Montgomery an opportunity to deal a fatal blow to the Axis forces arrayed against them.

The author starts the book by presenting an overview of the forces on either side as they were by mid 1942. He reviews the Commanders, the soldiers, their kit and their tactics and shows how they had evolved over the previous two years. In particular Battistelli emphasises the all arms flexibility of the Axis forces that enabled them to punch above their weight for most of the campaign.

Having brought the reader through those early inconclusive stages of the desert war, Battistelli then looks at the preparation's made by both sides for the inevitable offensive that would take place on this relatively narrow strip of land between the sea and the Qattara Depression. He reviews the relative strengths of both forces, the training they received and the planning that the Commonwealth Forces made for Operation Lightfoot (the opening stages of the battle) and the preparations of the Axis forces to repulse the attack.

Having now comprehensively set the scene Battistelli now moves on to the Battle itself. This is divided down into the break into the German & Italian defensive lines and how the axis forces reacted. Emphasis is placed on the fact that their temporary leader, General Stumme, died from a heart attack early in the battle. Rommel's swift arrival from Berlin re-galvanised the axis defence. The battle now entered the phase known as the Dogfight, the grinding down of the axis forces by the blunt instrument of attrition referred to in Montgomery's plan as the Crumbling. Finally operation supercharge results in the breakout of the allied armour and enables a restrained pursuit of the enemy.

Montgomery has often been criticised by armchair generals (and real ones for that matter) for not pursuing the axis forces more forcefully after Alamein, but he was vary aware that his forces were exhausted after the battle and was vary wary of stretching his own supply lines and weakening his own strategic advantage for the sake of short term gains. The debate will no doubt go on but it was Montgomery's measured and straightforward approach that gave the Commonwealth forces one of their greatest victories and turned the tide firmly against the Axis in North Africa.

I found this to be an good introduction to the Second Battle of El Alamein because it provides all the background needed to understand the events leading up to this climactic moment in history. When I bought it one of the things that caught my attention was the use of maps, order of battles and timelines throughout the book. The maps in particular are clear, detailed and compliment the written text very well. This isn't as scholarly a work as say Pendulum of War by Neil Barr but it is a good introductory book and cuts through the details to the heart of what happened. Battistelli's style is easy to read (although his paragraphs are often long and ponderous) and engaging enough to keep the reader interested without bogging down in unnecessary detail.