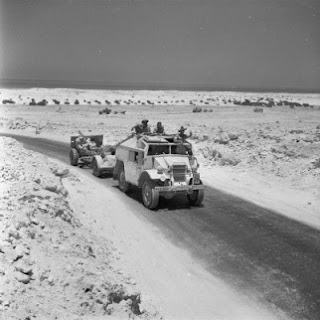 A few weeks ago I picked up some sheets of Emery Paper and a set of Sanding Belts for an Electric Sander at my local discount store. I should point out that I don't plan on polishing any metal and don't own an electric sander and that my purchases were for gaming purposes only. I had a vague idea that I could use these materials to make some cheap and quick roads for my desert battlefields and over the last week or so I have put that idea to the test.

The reason I bought two types was that I decided I needed to make two types of roads. The Sandpaper belts were quite course and once painted would represent dusty track ways in the desert. The dark grey Emery paper, which was much finer grained, would become metaled roads such as the one pictured here on the right.

I cut the emery/sandpaper to approximately 35mm wide which is about the same width as a FoW Small base. In total I have been able to make about 9ft of track way and 8ft of metaled road for less than £5. This will be more than enough for my needs at present but they were so easy to make I can easily add to my road network if needed later.
They aren't perfect - I would have preferred something with a bit more utility such as a flexible rubber material - but they will certainly suffice for now and are more than sufficient for smaller games.
Posted by BigLee at 06:49