This unit has been on my desk for several weeks as I have been sidetracked by one thing or another. Now that I have cleared my desk of diversions, and and re-organised it, I have finally made time to finish this Platoon. This Heavy Anti Aircraft Gun Platoon can be added to most companies as Divisional Support and consists of two 8.8cm FlaK36 Anti-Aircraft Gun sections. 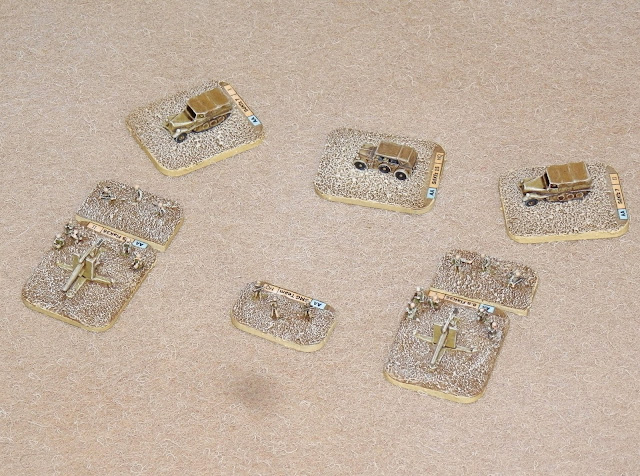 The German 88mm wasn't actually as good an AA gun as the British 3.7inch gun but it was the Germans innovative use of the weapon in its Anti-Tank role that gave this gun its formidable reputation. The high velocity of the gun resulted in a very flat trajectory when firing AP rounds and this made for a very accurate weapon over long distances. When used in prepared positions coordinated with the Panzer's, it was a lethal weapon, able to knock out almost any British tank sent against it. Although the British could have used their 3.7 inch guns in much the same way (indeed Churchill encouraged its use in this way) the simple truth is that the German army was much more adept at this kind of tactical combined arms integration than the Allies. 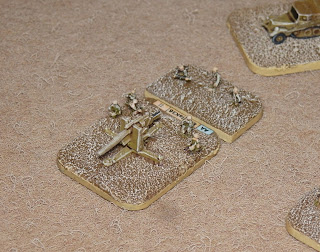 The normal rate of fire for these weapons in Flames of War is 2 but if you increase the crew from five to eight the RoF is increased to 3 making them even more deadly. There isn't enough space to fit 8 models around this gun so I have used the same method that Battlefront employed in its 15mm model  of the Flak 36 by creating a small supplementary base containing the extra crew. This is placed behind the gun and can be removed if casualties are taken. The extra crew cost just 10 points extra per gun so this is a pretty good investment.

The Guns come from the Skytrex 1:300 range which is now owned by Heroics and Ros. I may buy another couple of these when the old Skytrex stuff becomes available again in a couple of months. I'm not sure who manufactured the crouching figures on the gun bases but the quality was so poor I actually put some on facing the wrong way and it wasn't until I tried to paint them I realised my mistake! However the figures on the supplemental bases and on the HQ stand are from GHQ and are much better quality with good sharp details. I've now bought several blisters of Afrika Korp infantry and Artillery crew for future use. These are 1:285 scale but don't look out of place along side the 1:300th stuff. The difference in height (for infantry) is less than half a millimetre and against vehicles the slight scale variation it is imperceptible. 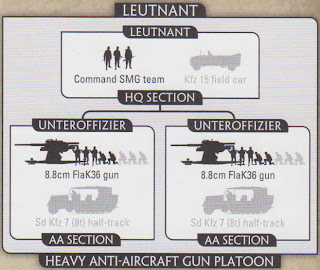