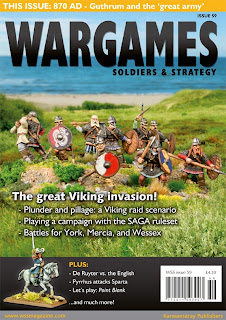 I picked up my copy of Wargames Soldiers and Strategy (issue 59) yesterday and once again I found myself thinking why am I not subscribing to this great magazine. I'm determined to rectify this situation because over the last year - since it relaunch - they haven't had a single duff issue.

One of the regular highlights of WSS is the column 'This Gaming Life' by Rick Priestley. This months article looks as the thorny question of ground scales verse figure scales. Its a subject that I suspect most wargamers pay very little attention to, but as a designer Priestley and his peers have clearly devoted much brainpower to the whole subject. How exactly can a game preserve 'realism' within the confines of a regular sized games table? The simple answer is it can't. The key it seems is proportionality, not scale, with a little bit of 'willing suspension of disbelief' thrown in.

Like Wargames Illustrated this magazine also goes in for themed issues and this month its all about Vikings! The themed section starts off with a trio of great articles - Guthrum and the Great Army, The Siege of Eoferwick and The invasion of Wessex and Edington - by the evocatively named Benedict Coffin. This is them followed up with a look at SAGA campaigns, a cool little Viking raid scenario (with a twist) and a review of suitable miniatures for the Dark Age era.

One of the other things I always enjoy about this magazine is the fact that they devote several pages to new releases. The format of this section is spot on as far as I am concerned giving a picture and just enough information to wet the appetite and allow the reader to dig deeper if they are interested. There are several releases reviewed in this issue that have my juices flowing and I'll be keeping an eye open for them in up-coming trade conventions.

Incidentally the magazines website has a new Wargames Calender online which is worth checking out (after you've checked mine, obviously!!).

There are several other great articles in this issue including The demon dip – cheating or a proper paint job? by Phil Hendry, Faces, Bases and Flags – painting the cover vignette by Dave Woodward and the column Up Front by Richard Clarke. I've pretty much read it cover to cover this month so I have decided to stop prevaricating and have just taken out a long overdue subscription.
Posted by BigLee at 22:01