The Dagenham Dungeon Delvers met on Friday for a long overdue D&D 4e game. We are continuing the Evil GM's campaign The Sunless Citadels which we have been playing now for a couple of years. The last game was two weeks ago and I missed it because I was in hospital so the last game I played was back in February! I needed a game and I needed it bad. 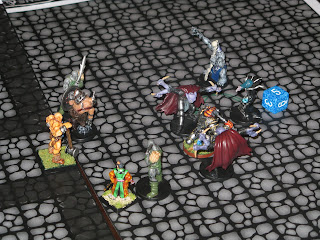 Most of the evening was taken up with a large 'end of level' battle against a group of Aberrations lead by a Mindflayer. The illithid was fortunately occupied casting some sort of Ritual during most of the battle, leaving our party to fight two Foulspawn Beserker's, two Foulspawn Mangler's and a Foulspawn Seer.

The Berserker's had a nasty ability, an Aura which fogs the mind of anyone attacking it in Melee so they were difficult to get at without risking hitting adjacent allies. On several occasions the groups PC's found themselves hitting friends instead of foes.

The Mangler's were also very dangerous, especially in combination with the Seer which has two attacks that cause targets to be dazed and thereby grant opponents combat advantage (Warp Orb, an at-will range 10 attack that dazes the struck target and Disorient Blast, a huge close blast 5 that also dazes the target). With most of the party constantly being Dazed the Mangler's were then able to use their Dagger Dance ability to make three attack and shift combinations to great advantage because Mangler's gain +2d6 damage when they have combat advantage. Ouch. 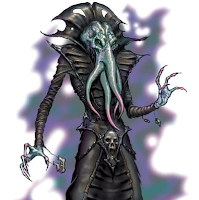 Eventually the Mindflayer's ritual was broken and the Illithid entered the fight himself. Using his tentacles he grabbed the groups Avenger Laguna and proceeded to munch down on the Elfs skull.  Laguna had already taken a lot of damage earlier in the battle and was nearing zero hit points when the Mindflayer began its attack. Unable to break free from the attack it wasn't long before the elf was dropped to the floor dead, his brains eaten right out of his skull!

The Illithid also tried the same attack on the Barbarian, Samm and my Dragonborn Warlord, Uthek but both characters were able to release themselves from the grasping tentacles. Ultimately their combined attacks on the outnumbered Mindflayer saw it beaten and slashed until it too fell to the ground dead.

We had a great evening with lots of laughter and jokes driving the evening along. Even the death of one of our Player Characters didn't dampen the fun (well, not for those of us that survived). However we clearly missed an opportunity towards the end of the game. After all the Illithid was an intelligent creature and probably could have been negotiated with. We should have offered him a job in our party of adventurers. Especially as a vacancy had unexpectedly come up...
Posted by BigLee at 09:01