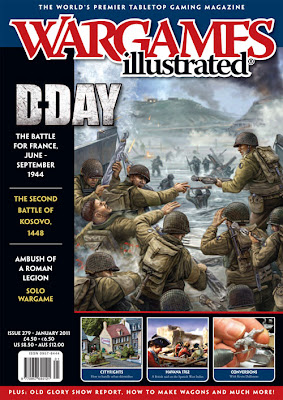 I've just received my copy of the January issue of Wargames Illustrated. For me this has been an eagerly awaited issue as I'm collecting FOW armies for the Normandy Campaign and I am sorely tempted to buy the D-Day box set just released.

D-Day: The Allied Invasion of France Inside this issue the D-Day Theme is gorgeously illustrated with a large and well presented article about the largest seaborne invasion of the second world war. A second article Eight Armies in Normandy presents a large scale battle scenario featuring US and British beach landings, German defences and airborne landings. This massive game was played out over two days by the staff at battlefront an looked like a hugely enjoyable challenge.

So far I haven't had a chance to read through the rest of the magazine but there looks to be a good selection of articles covering alternative periods.


Once again a wide selection of content presented to an excellent standard. Now if you'll excuse me, I need to drool over the D-Day articles...
Posted by BigLee at 09:01