On Saturday I went to Dragonmeet with my daughter for our annual pre-Christmas game convention / shopping trip. We usually spend a long morning watching games, shopping and talking to other gamers before heading off to Oxford Street and Covent Garden to soak up a little atmosphere. Despite the bitter cold attendance at the convention seemed higher this year than last, which has to be seen a good sign given the current economic climate.

I had a long chat with Jeff Combos author of the roleplaying game Hollow Earth Expedition. I've been intrigued by this game for a while and after spending a a very convivial 20 minutes talking to Jeff I decided to buy the core rulebook. The game is set in the tense and tumultuous 1930s and draws its influences from the literary works of genre giants like Edgar Rice Burroughs, Jules Verne, and Sir Arthur Conan Doyle. This adventure RPG emphasises storytelling and roleplaying while providing an elegant framework for combat and action.

The convention is very much focused on participation games with tables on two floors of the Kensington Town Hall. However there are also a small selection of excellent traders in attendance including smaller independent companies selling their games. One of the larger stalls was Leisure Games and I picked up the latest FOW rulebook (Das Book) at a very reasonable price.


I also bought another set of gaming dice because... well just because. A gamer can never have enough dice. And besides they were shiny and called to me.


Another interesting stall was the Mongoose publishing stand. They always have an interesting selection of books on sale for their core games. One set that caught my eye was the Judge Dread game. Next to the range of books they also had a glass cabinet with various models to accompany the game, including one of Dread himself. 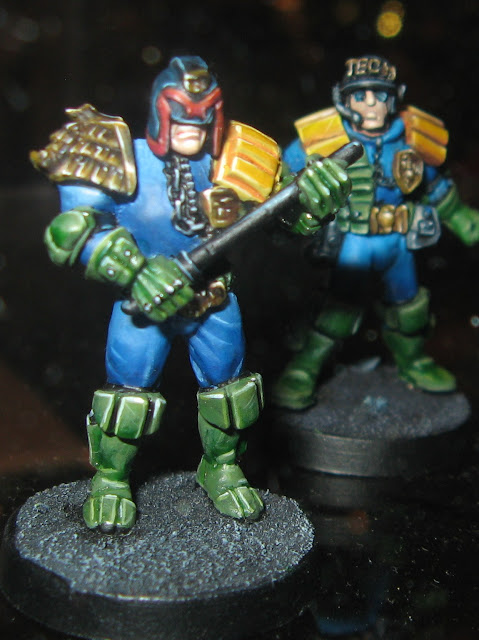 After we left the convention we headed over to London Graphics next to Covent Garden so I could pick up a couple of new Winsor and Newton Series 7 brushes. These are expensive but by far the best brushes I have ever owned and the ones I got a couple of years ago still look and perform as good as new. My daughter was also able to get me a Christmas present there (with a bit of hinting from me) so all in all it was a worthwhile diversion.

Despite the cold we both had a nice day out and came home with a satisfactory volume of game loot. Dragonmeet continues to be an enjoyable event and one that I'm sure we will go to for many years to come.