Yesterday I had the pleasure of stomping on some of Napoleons finest. Posties Rejects gathered for a Napoleonic wargame using a set of home grown rules that flowed very well and were easy for a newbie like me to learn. I commanded the left wing of the Austrian army facing off against a mixed French force of veterans. 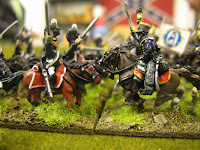 Our plan was for the more experienced players in the centre and on the right wing to force the pace of the battle while my job was to hold the left flank firm. As it was the plan evolved over the course of several turns with my 2nd Division slowly pushing forward and dominating the high ground. It was a tough fight but a series of advantageous initiative rolls worked against our opponents.

I had an early lucky break with a resounding victory over the Cavalry facing me sending them into an uncontrolled rout that saw them off the table. I can assure you this was nothing to do with tactics or clever playing, it was just lucky dice rolls. Not that I'm complaining because with the enemy cavalry gone - and his reserves at least two turns from entering the fray - I was able to push forward with my Infantry and consolidate my line.

Meanwhile our centre got a little bit muddled but essentially worked its way down to an artillery duel and some desultory infantry charges. The real action took place over on the Austrian right wind with some dramatic cavalry charges and counter charges that saw units rushing to and fro across the table with élan.

Here are a few more pictures of the days action.

Apologies for the lack of detail (units involved etc.) but I was focusing on learning this set of rules as I have never played them before. Next time we play I'll make more detailed notes and try to put together a better battle report. I have to say though that despite the handicap of not knowing the rules these were easy to understand and I soon got to grips with them and was able to focus on tactics rather than technique. All in all a very enjoyable game.
Posted by BigLee at 09:01