Last week I posed the question "are you a closet gamer?" and so far the associated Poll has had a good and quite interesting response. One of the reasons I brought the subject up was the fact that in the last couple of weeks I have twice had to explain to a non-gamer what roleplaying was.


My hobbies are more diverse than just roleplaying but even the supposedly ‘peculiar’ hobby of Wargaming is easily understood by lay-folk. With Wargaming there are opposing players, definable objectives and usually a winner. All within the realms of most ‘normal’ strategy games. In short Wargaming has a familiar format that anyone who has ever played chess or draughts will recognise. Roleplaying however is a different beast entirely and defining it in a simple way is hard, if not impossible. 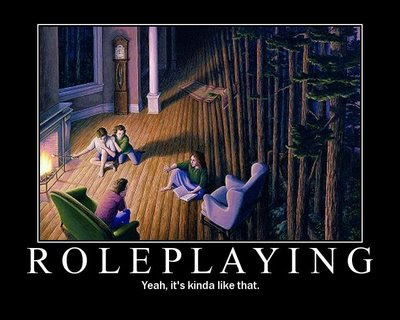 A commonly referred to description is “co-operative storytelling” which perfectly sums up roleplaying to a roleplayer. But whenever I have used this phrase on non roleplayers I see their eye’s glaze over and just know they haven’t a clue what I’m talking about. I usually try to correct matters by expanding the explanation, drawing parallels to Improvisational Theatre or childhood games of make-believe. This just makes matters worse because it seems to the outsider that roleplayers are just sitting around talking and making stuff up. This isn’t clearly isn’t a grown up pursuit and hints at child like behaviour or worse still, mental illness.
Of course the reality is that roleplaying games do have more in common with childhood games of lets-pretend than they do with structured board games or computer games played by adults. Despite the proliferation of rulebooks that provide the internal structure of a game like DandD, at heart it’s still a game of make believe. And it’s this element of childlike behaviour juxtaposed with a grown up game that I think freaks people out and has often turned DandD into a taboo games that people can’t understand.

History teaches us that which cannot be understood is often feared. Its irrational and bigoted but its also an evolutionary throwback to our caveman days when the unknown usually came with 9 inch sabre teeth and a taste for human flesh. And its this combination of confusion, lingering suspicion and sometimes outright hostility that makes the need for a clear definition all the more important.

So here's my definition, for what its worth.


"Roleplaying is game of storytelling where the players imagine themselves as characters in a fictional adventure and work together to explore the location and events as described and guided by a referee."

I'd be glad to hear what you say when asked, What is Roleplaying?
Posted by BigLee at 09:01