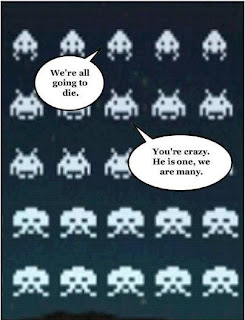 I came across a great cartoon recently that sent me on a trip down memory lane. I'm not a big player of computer games these days, but when I was a kid I was hooked like pretty much every boy my age. I remember a family caravan holiday at Clacton (on the East coast of Essex) where I spent a large amount of time - and pretty much all of my pocket money - playing Space Invaders at the local amusement arcade. I'm not sure that my parents thought it was a productive use of my time but it beat the hell out of fishing.

I think of myself as fortunate that I grew up just as computing, and computer games, started to become accessible to the ordinary people. That's not to say I or my parents could afford to take advantage of the latest home technology. We always seemed to be a few years behind everyone else and that's still the case for me now (I'll get that iPad eventually). Maybe this is why I was hooked to the video arcade when we went on holiday. For a measly 10 pence I could play the latest game, if only for a few seconds until I got killed or the credit ran out. And that for me was the great attraction of Space Invaders. It was the first game that I personally had encountered that rewarded skill with extended play... and for a while I got quite skillful indeed. What an incredible summer that was. 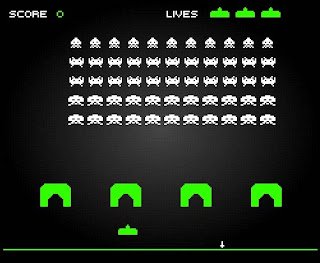 The game was designed and programmed by Toshihiro Nishikado for the Japanese company Taito and was first released in 1978. It was later licensed by the US company Midway and in 1980 was licensed by Atari for the 2600 home system. Its still around in various forms for modern media which says a lot for the durability of this simple game. The original game was actually in monochrome with the coloured parts simulated by use of coloured plastic overlays. Space Invaders has allegedly earned Taito in excess of $500 Million USD since it was first created. #
Not bad for the most basic of shoot-em-ups.
Posted by BigLee at 09:01