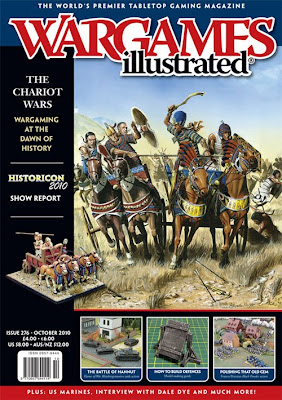 My copy of Wargames Illustrated landed on my doormat early in the week and not a moment too soon either. It seems that whenever I finish a book and starting looking around for something new to read WI turns up.

This months issue is focused on the role of Chariots in warfare. I've only every used these once in a game and it didn't go well for me. Way back when I was a student my friends and I played Warhammer fantasy Battle and I had an undead army featuring a unit of skeletal chariots. Unfortunately I used them against a stalwart unit of Dwarven warriors and it was like driving a car into a brick wall. It wasn't a pretty sight.

The opening article on the theme of chariots is Begatting and Smiting and is a look at the dawn of the chariot as a weapon of war. This is followed by a piece on the Sumerians and Akkadians who slugged it out back at the beginning of recorded history about 3000BC. This article is accompanied by a great selection of colour pictures of a wide selection of miniatures guaranteed to get your creative juices flowing.

Another great article which I enjoyed reading was an interview with former US Marine, Captain Dale Dye. This is the first half, the whole interview is available as a podcast from History.net. This part focused on how Captain Dye became involved in Hollywood.

One of the things I enjoy about WI are the How to Build articles that are integral to every issue. This month there are two and both are excellent. The first looks at how to make your own war chariot for gaming with. The second article is about how to make battlefield defences including Facines, Gabions and Mantlets. Although written with 28mm models in mind I'm sure the tips here could be adapted for the 15mm battlefield.

There is also a great selection of other articles covering several periods making this a good all round issue.
Posted by BigLee at 09:01