Yesterday I took the kids to Chislehurst Caves in the South Eastern suburbs of London. Some sections of the caves go back to about 1250 AD and the last known mining (for chalk & Flint) was in the 1830's. During WWI the caves were used as an ammunition depot for the nearby Royal Arsenal at Woolwich. The caves were then used during WWII by the local authorities for Londoners sheltering from the Blitz. At its height the caves protected 15,000 inhabitants and included electric lighting, a chapel, a hospital, barbers and a canteen.

The caves have featured in several television programmes including an episode of the BBC programme Doctor Who from 1973 titled The Mutants. Of course according to my kids this isn't Dr Who... "Jon Pertwee who?" they said. "Yes" said I, much to their confusion. 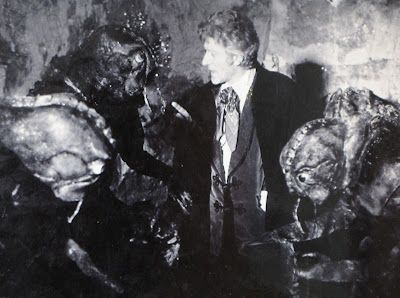 More recently, some of the tunnels have been used for live action role-playing (LARPing). This must have been an interesting experience because its not until you've wandered these tunnels with just a paraffin lamp to light your way do you realise how dark it is. This might sound like a silly statement but if you've ever played D&D you'll be familiar with the standard equipment every adventuring Player Character takes with them into the dungeon. The (burning) torch and Lantern sound fine on paper, but in reality they give off very little light. 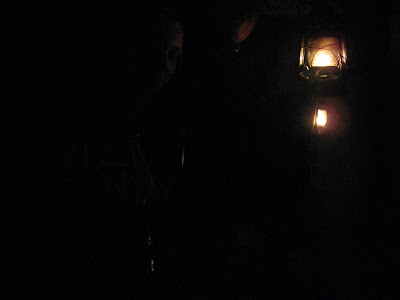 I've run or played in plenty of games where the 'light source' of an adventuring party is given little or no thought. It seems to be assumed that if a torch provides light for say a 60ft radius then everything is clear right out to that distance. In reality anything beyond about 15-20ft will be dark and hard to identify without direct light (from a Bullseye Lamp for instance). In future I will definitely be emphasising the poor visibility provided by these light sources when I run a game. The ubiquitous adventurers burning torch will never be the same again.
Posted by BigLee at 09:01