I've been trying to make a final decision about what sort of Panzer Company I am painting up. I needed to settle on this before proceeding with any more vehicles (and before I finish the Panzer IV's I'm working on now) as this will determine the identification markings and vehicle numbers I use.
So the decision... a Panzer Kompanie from the Panzer Lehr Division. This division is featured in the Villers Bocage book but the Army List is in text rather than Graphic form. I rather like these graphic charts so I decided to make an organisational diagram based on the army list given in Villers Bocage. . It's still a work in progress but I'm aiming for something that looks similar to the ones produced by Battlefront. Here's a peak of what I have so far. 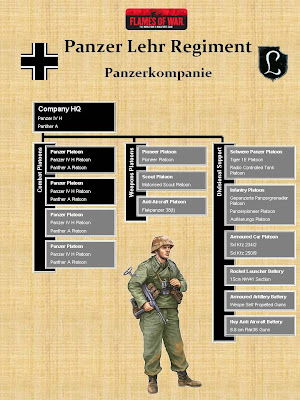 The next step is to compare it to other army lists (for example from the Cobra sourcebook) to try and settle on a standardised format.

Sharp eyed and regular readers of this blog may remember that I was initially working on the idea of painting up an SS Panzer Company. But my first attempt at painting SS Pea Dot camouflage convinced me I was utterly insane trying to do this when I have never painted 15mm before. I have a lot to learn about this 'new' scale before I start tackling such advanced paint schemes.
Posted by BigLee at 10:01