I posted a picture of my Salute purchases with my report on Saturday but I thought it worth looking in detail at my very nice haul. I bought quite a lot this year but I also picked up quite a few freebies as well. 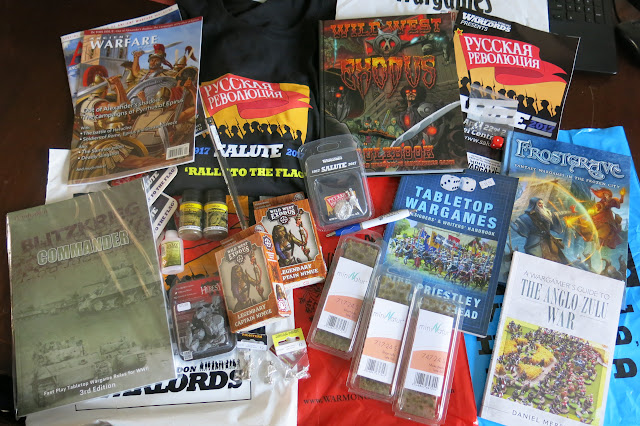 AW Magazine: I had a quick chat with Jasper Oorthuys the magazine editor about their magazines. I already subscribe to Wargames, Soldiers and Strategy and have also been enjoying Ancient Warfare. In particular I enjoy their YouTube videos for the wide ranging content and discussion in them. I thought I had better put my money where my mouth was so I picked up a couple of back issues of AW on the Punic Wars and another on Pyrrhus of Epirus. 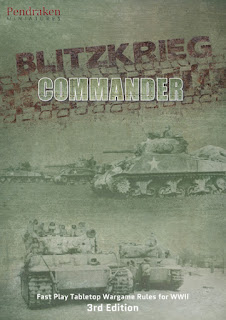 Blitzkrieg commander III: I'm always saying that I'm not very good at reading rulebooks but I keep collecting them non-the-less. The third edition of Blitzkrieg Commander was being launched at Salute and I had already decided to pick up a copy. On first inspection I like what I see and hopefully I can have a proper read through the rules this coming weekend. I'm not necessarily going to switch from FOW but its always useful to read other rules and see how they interpret the same period.

Frostgrave: I can hear Ray screaming already but it had to be done. The young Padawan has been hinting heavily about finding a Fantasy rule set to play and so I thought I would pick this up and give it a look over. I have a load of DandD/Roleplaying models and terrain from years ago that can come out again. Some cosmetic conversions and new bases will make many of the models suitable and get us started.

Wild West Exodus: My third rulebook from Salute, although this time it was a freebie. The company behind this product were giving away 1st Edition copies with a promise to give out the 2nd edition rules for free when they are released. I'm not sure its a system I want to play but I've handed the book to the Padawan to see if she's interested. At the moment her focus is a bit all over the place and if she could just settle down on a rule set and a collection of models I think it would solidify her interest in gaming.

Vallejo Textured Paint: I've seen this product reviewed and it looks potentially very useful. The paint is thick and grainy and sets with minimal shrinkage so can be used to replicate muddy ground or mud splatters on the side of a tank. At £4.50 for a small pot its not cheap so I only picked up two posts to try out. One is called European Mud which is a dark brown and the other is similar but with fibres in it so it looks like churned up grass and leaves. Check out this YouTube video here to see it being used in a tutorial.


Modeling Supplies: I wasn't planning on buying lots of modeling supplies but I found a few items relatively cheap and decided to get them while I saw them. I picked up some superglue and three packs of Silfor Tufts (Late Fall, Short) that I use a lot. I also treated myself to a new Winsor and Newton 000 Series 7 Brush. My existing brush took a battering during the Painting Challenge and no amount of cleaning and TLC was going to bring it back from the dead so it needed replacing,


A Wargamer's Guide to The Anglo-Zulu War: I already had this book by Daniel Mersey on my hit list. I'm interested in the period and always enjoy these games when Posties gets his massive 6mm collection out on the table. This doesn't mean I'm going to start collecting these myself...but I am thinking about it!

3 Fantasy figures from Midlam Miniatures: Completely random purchases bought simply because I like the models and because they were just a couple of quid each. These will go in my model box to restock the lead mountain in readiness for future painting challenges. 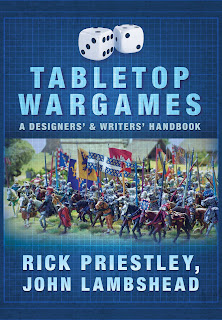 Tabletop Wargames: A Designers' and Writers' Handbook:  Another book on my must buy list that I managed to find at the show. I like the idea of peeking beneath the veil of the wargames designer to understand the problems and challenges of designing a set of rules. I'm not about to write rules myself but it will be an interesting read on a lazy Sunday afternoon (if there is such a thing).

Freebies:  As well as the Wild West Exodus rulebook there were plenty of other freebies being given out. Ticket holders were given a mag as they went in and this contained from models for the aforementioned rules set and well as a dice and of course the Salute figure. I quite like the model although I cant see a use for it right now. I'll add it to my model box and I expect it'll see the light of day in the next Painting Challenge.

I also treated myself to a Salute T Shirt. In fact it was the first thing I bought. In previous years I have left it a bit late in the day before heading to the Warlords stand and consequently missed out on a shirt in my size ('Marquee Size').

UPDATE: Completely forgot to mention my Snow Troll that I bought from Heresy. I love their models and nearly always pick something up from them. This model looked just so awesome it just had to be mine! Its a multi part resin figure but is so full of detail and expression I know it'll look fantastic when painted. Another one for the 'lead' mountain in anticipation of next years Painting Challenge.
Posted by BigLee at 17:30