Salute is over for another year and every bone and muscle in my body hurts....but it was great non-the-less! Despite the cost both to my wallet and my body I still think Salute is the highlight of my wargaming year. I get to see a lot of traders and demo games that I wouldn't otherwise encounter and many companies use Salute to launch new products and miniatures. Like many wargamers I spend most of my gaming expenditure online these days, but I still love the chance to 'browse' and lay hands on products, rules and miniatures. 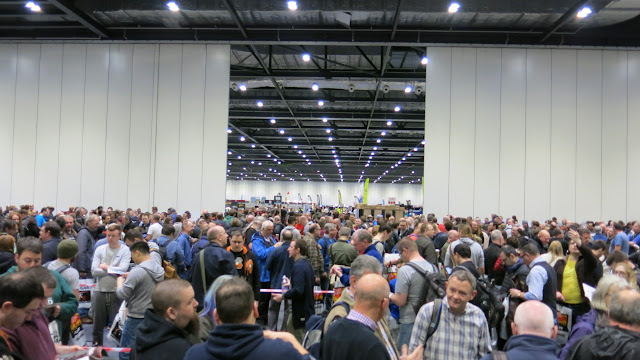 Salute seems especially busy this year. The queuing system prior to the show was strained to the uttermost and the queue hall was filled almost completely before the doors opened. My daughter, the Young Padawan joined me again this year and she seemed to enjoy the size and spectacle of the show as much as I did. She couldn't quite match my spending but if she could she would have. I treated her to several models and some paint and hopefully this year I can ignite her enthusiasm for painting as well as gaming. Postie also treated her to some models as well (nice move sir!) so she had a very good day. 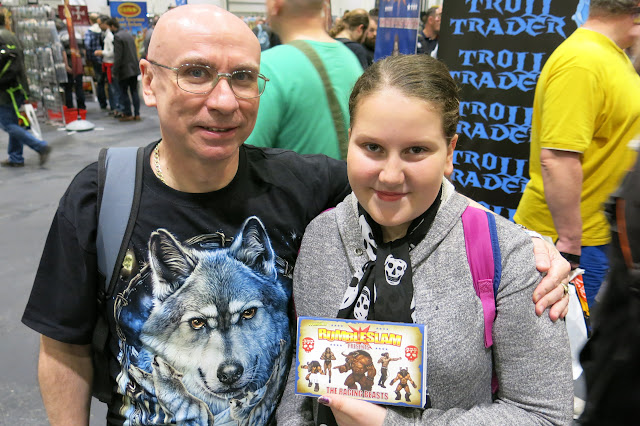 As well as spending a shed load of cash (gotta rebuild that Lead Mountain!) I always enjoy Salute for the chance to meet and chat with a wide range of people. For several years now there has also been a regular 'Bloggers Meet Up' somewhere in the centre of the show. Not as many bloggers got together this year as last (possibly dues to conflicting event at the same time on a trade stand) but everyone who did arrive exchanged our yearly handshakes, pleasantries and in some cases gifts! As well as the pre-arranged meeting I often get stopped as I walk around by readers of BLMA and its always great to put faces to names. 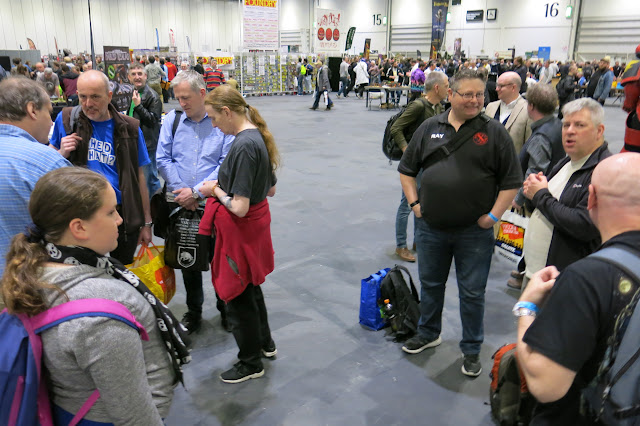 I was massively impressed by the standard of the demo games this year. Salute always hosts the best demo's and participation games and every year I think the standard couldn't get any better only for it to do just that the following year. Most of the figures on display are well beyond what most of us would call 'tabletop quality' with many examples of miniatures that wouldn't have looked out of place in the painting competition. I only briefly managed to look at the competition with crowds three or four deep in front of the display cabinets. I took a few photo's but to be honest the best pictures of the winners will be published in Miniature Wargames soon enough.

One of the disappointments for me this year was the apparent lack of 6mm demo games on display. I only counted two games this year (correct me if I’m wrong, but that’s all I remember seeing). Now I would always expect  to see lots of 15/28mm games being played but just two 6mm games out of nearly 100 demo tables is only about 2%. Some recent polls I have read say that as many as 30% of wargamers play 6mm regularly if not exclusively so this scale is being massively underrepresented at Salute. To be fair the reason for this is probably simple economics. 15/28mm rules systems and miniatures dominate the marketplace and therefore the demo tables of our shows. Another reason is that it is much harder to achieve that ‘Wow’ effect with a 6mm table, its takes a lot more models and a lot more terrain to have a real impact. That's a worrying conclusion because it suggests that shows like Salute are more about the visuals than the content or the playability of rules systems and it leaves a lot of small scale wargamers out in the cold.

Anyway, that's enough chat from me, here are a selection of my photo's from the show. As usual I shot far too many pictures but I have tried to distil this down to just the best ones to give you a flavour of the show. I hope you enjoy them.

And finally... my Loot from the show. I bought the new Blitzkrieg Commander rules that came out today, and I have at last succumbed and bought Frostgrave. I also picked up several books including Tabletop Wargames which I have wanted to buy for a while now. I restocked some modelling material and picked up a couple of pots of Vallejo 'mud' which I want to give a try. I also bought an assortment of models for various types, just to paint (some for next years Painting Challenge).

That's it, I'm done in. Time to slump on the sofa and watch some TV. See ya'll next year!