Over the weekend I finished painting my submission for the Gambler/Risk Taker bonus round of the Analogue Painting Challenge. Given that I am collecting figures for WWII North Africa and the Second Punic War my entry was only ever going to be one of two characters; Rommel or Hannibal. Way back in 2009 I painted the Hannibal miniature that was given out at Salute that year but I have never yet painted Rommel, and it just so happened that I had a figure sitting neglected in my lead mountain. Actually the model I have used isn't lead at all, its a plastic 1/48th scale figure from the Tamiya WWII Famous Generals set. 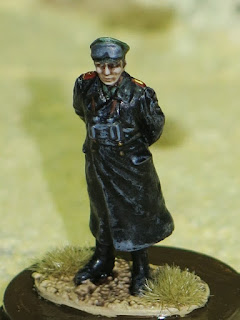 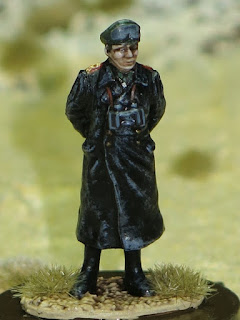 As the title suggest I'll be sending this figure all the way to the cold wastes of Canada as my 'Curtgeld'. I just hope the plastic figure makes it there in one piece. I sense a bit of custom made packaging in my near future. I bought this set of models while on Holiday last year. It was an impulse purchase while we wandered through the high street of a random Devon village and having chanced upon the only model shop for 50 miles (or so it felt) I simply had to buy something. Actually I think the shop owner was a bit startled by this wild eyed city wargamer wandering into his rural shop but I was still happy to push a little money his way in return for a kit that includes figures of Montgomery and Patton as well as Eisenhower and Rommel. 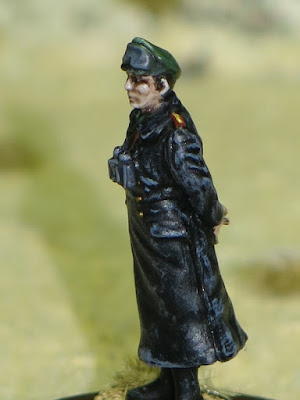 I have to admit that I struggled to paint this figure. its been a long time since I have painted a 28mm figure - having long ago abandoned it for 15mm and 6mm - and it seems I have unlearned a lot of the skill and technique required for this scale. I'm not as happy with how this model turned out as I am with my 6mm submissions to the challenge but in the end I just had to draw a line under it and says "its done, walk away"!. Fortunately the Tamiya set I got this figure from contains two of each General so I have another Rommel to work on at another time. Maybe when I have less time pressure to work on this I can produce a better result second time around.
Posted by BigLee at 09:15