Since my redundancy last year my reading output has dropped drastically. I rarely get a proper lunch break these days and this was usually the time when I'd get most of my reading done. Add to this the fact that with my new job I'm so knackered when I get home from work about the most ambitious thing I can do of an evening is not fall asleep in front of the TV! My pile of unread books has grown ever larger and so I decided to make a real effort to squeeze time (any time) for reading back into my daily schedule...and I started by reading a book I have already read before! In my defence it was a Donald Featherstone classic and I one that I value as probably the best book I have for wargaming the battles of North Africa in 6mm.

Tank battles in miniature: A wargamers' guide to the Western Desert Campaign in 1940-1942 was originally published in 1973 but had somehow gone completely under my radar until I bought the 2010 paperback reprint edited by John Curry. I enjoyed the book so much that I stumped up the cash for an original first edition hardback copy and this is the book that I have been reading recently.

I wrote a brief review of the book when I first read it and decided to republish it again here below:

The book contains a clear and concise summary of the actual campaign at each stage of the war. This is probably the clearest description I have read so far in fact. Each phase of the campaign is clearly delineated and at the end of each section the vehicles and tanks used by both sides are listed along with approximate numbers. This will be of great importance when building an army list or picking a particular period or battle to recreate. Having detailed the action of the campaign the author then goes on to discuss the tactics and their evolution throughout the war. 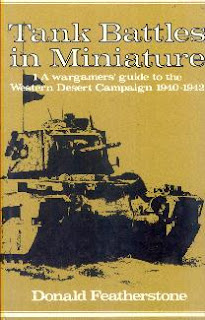 Following on from this is a section describing the terrain encountered and it was here that I realised what a really good writer Donald Featherstone is. Don's descriptions are evocative, vivid and clearly convey the desolate and barren land across which men fought and died. This was as harsh and as unforgiving a landscape as anyone could wish to fight for. But it was also 'ideal' country for manoeuvre warfare and as such was unlike any other theatre in the Second World War.


Further chapters describe the technical specifications for the vehicles, tanks, guns and aircraft used throughout the campaign. There are also sections on communications, visibility and navigation, how top fire tank and anti-tank guns, 'brewing-up', air operations, the Long Range Desert Group, minefields and supply. Much of this can be found in other books but this volume collects together a wide range of facts that not only give a really good picture of the Western Desert war but will also be invaluable to anyone planning on wargaming the period.

This is an truly excellent book that is just as useful now as it was when first published in 1973.